While we were fortunate to be in Europe with the ability to travel through the UK during the pandemic, it sure put a damper on 18 months of international travel, and returning to the US with the international travel restrictions, new variants and uncertainty around travel, we have been holding steady not traveling much.  Considering we went from full speed ahead traveling at least once a month, the last two years have been long.  But after much deliberation, we finally just booked a trip (a very insured trip - I work for a travel insurance company, we know how to insure trips!). We are vaccinated, boosted and vigilant (a requirement for entry to Spain). Plus the wanderlust is strong in the Ennis household. 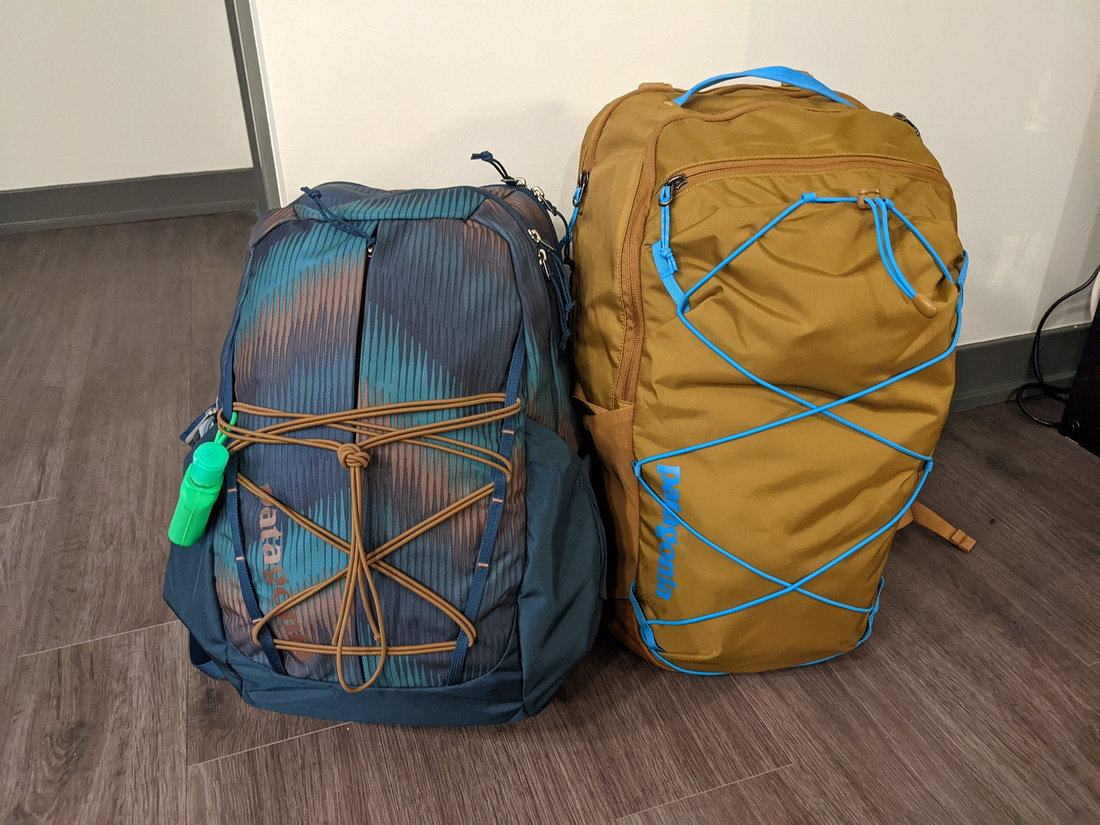 We arrived at the airport to find out that our flight to Barcelona is the first one in two years -- what a coincidence that this is our first true leisure trip in two years.  American Airlines celebrated by having buttons made by local artists representing Barcelona which were then handed to each passenger. A lovely start. 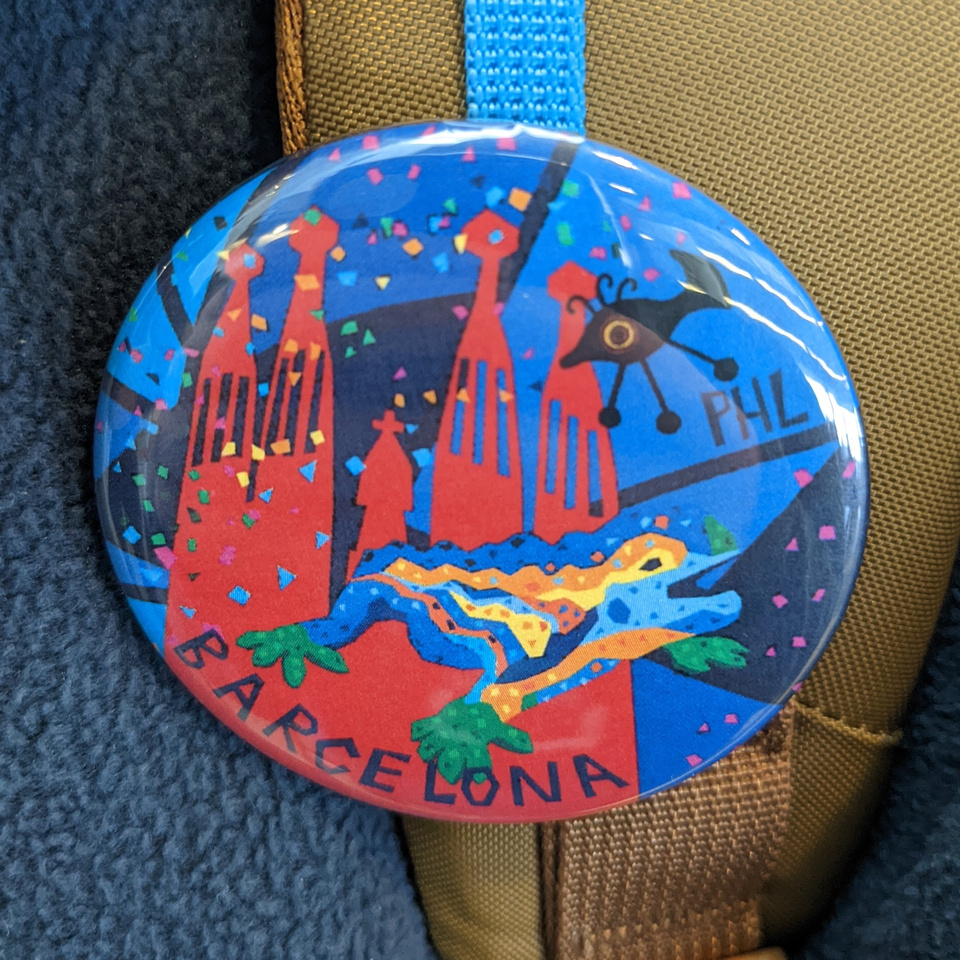 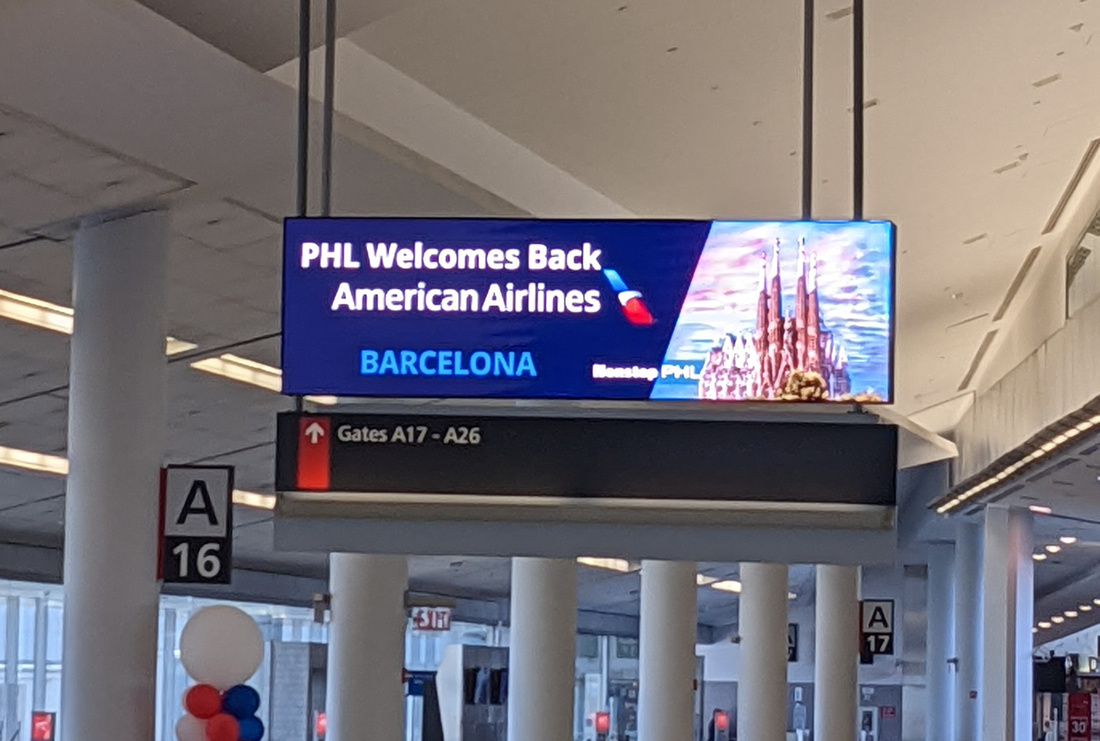 Because we haven't travelled much lately, our travel budget has just been sitting waiting to be spent which means when we were offered an upgrade to Premium Economy for a minimal cost, we jumped. Especially for an overnight flight, premium economy gives you just enough comfort to sleep a little bit and the food is just a little bit better.  You also end up with livelier flight attendants -- ours really enjoyed stopping by with commentary.  Want to know how to charge your devices? "Well you need to be a contortionist to do it, but it's just under your armrest here". Didn't eat your salad? "Your momma is gonna be so disappointed in you for not eating your greens". Didn't eat your breakfast granola? "What would momma say? It's fine, I love these things, I'm gonna take yours home with me [as he puts the granola in his pocket]".

We also ended up sitting in front of an older couple who I really hope was a glimpse into our future -- they were so dang cute -- giggling together, reminiscing about all their travels, giggling some more.  You can really tell there has been so much love in their life and even after all the years they have been together, they still love each other's company.

I digress -- after an eight hour flight with maybe an hour of sleep each, we begin our adventure of managing the metro/train system.  I will admit that much of this trip is a bit of 'welp I guess we will figure it out', because I think deep down, neither of us were confident we were going to even be able to come so we did very little planning.  We still don't have a hotel to stay at in Madrid -- but that's a problem for later.  Much to our delight, Barcelona has tourist metro tickets which allows you to purchase unlimited access in 24 hour increments.  In our early days, we probably would have tried to do the math to see if we really needed day passes or if we should just purchase tickets as we go, but these days, it's not worth the effort. Plus having unlimited access means we use it much more -- and Barcelona's included access to and from the airport, the metro, the bus and the funiculars. It just makes it easier to not have to worry about it, plus at about 8 euros per day, 72 hours of access was pretty cheap.

While we normally try to stay at BnBs, the timing of our flight was so early in the morning (7am arrival!) that we needed the ability to drop our bags off at arrival rather than lugging them around until the afternoon check-in, so we booked a hotel in the middle of the city. With a Sunday check-in, we had the luxury of weekday rates rather than weekend ones, so we were able to book a very nice 4* hotel right on La Rambla. Highly recommend Hotel 1898 if you are ever in Barcelona.

Our hotel is just short stroll from the Gothic Quarter, so we started there just to get a lay of the land.  One of my favorite parts of Europe is all the random festivals which within an hour we had stumbled upon one -- Festes de Sant Josep Oriol.  I have absolutely no idea what they were celebrating other than the Saint Josep, but it was quite a wild little celebration. As we were standing in the square, we started seeing very large doll/puppet people start showing up.  I mean large -- like the tallest ones were 15 feet tall -- just towering over us.  Then the performers started showing up. Between the dancers, the human towers, the little kids in costumes, we knew we were in for a wonderful cultural experience. First up were the human towers who were a group of people all ages who literally climbed on each other to build towers. Really unique to see -- we even made their Instagram post (Where's Wally style!). 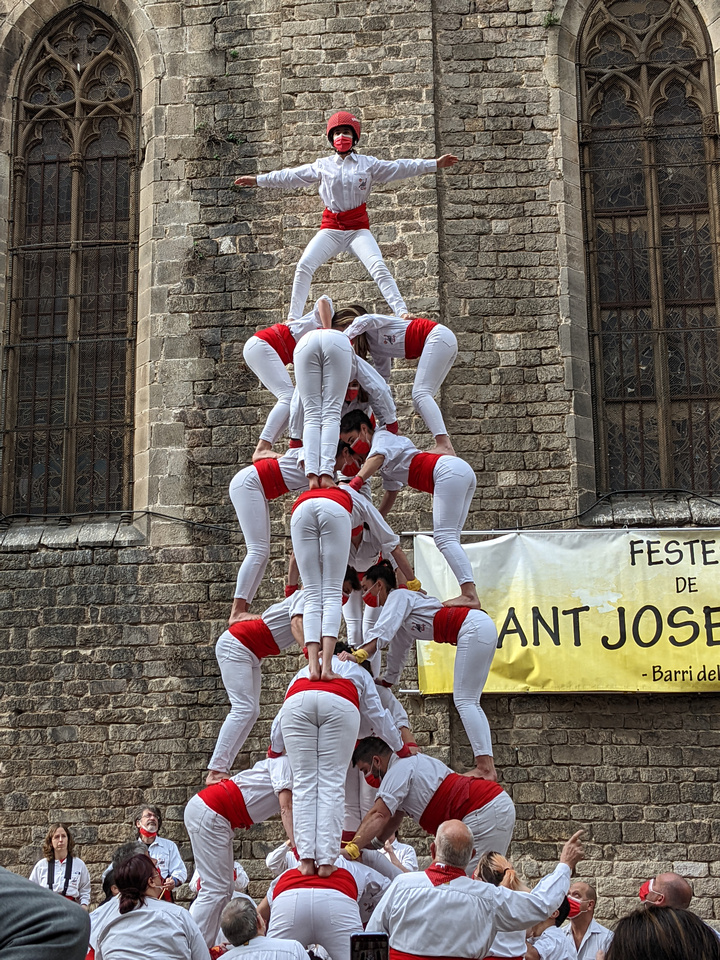 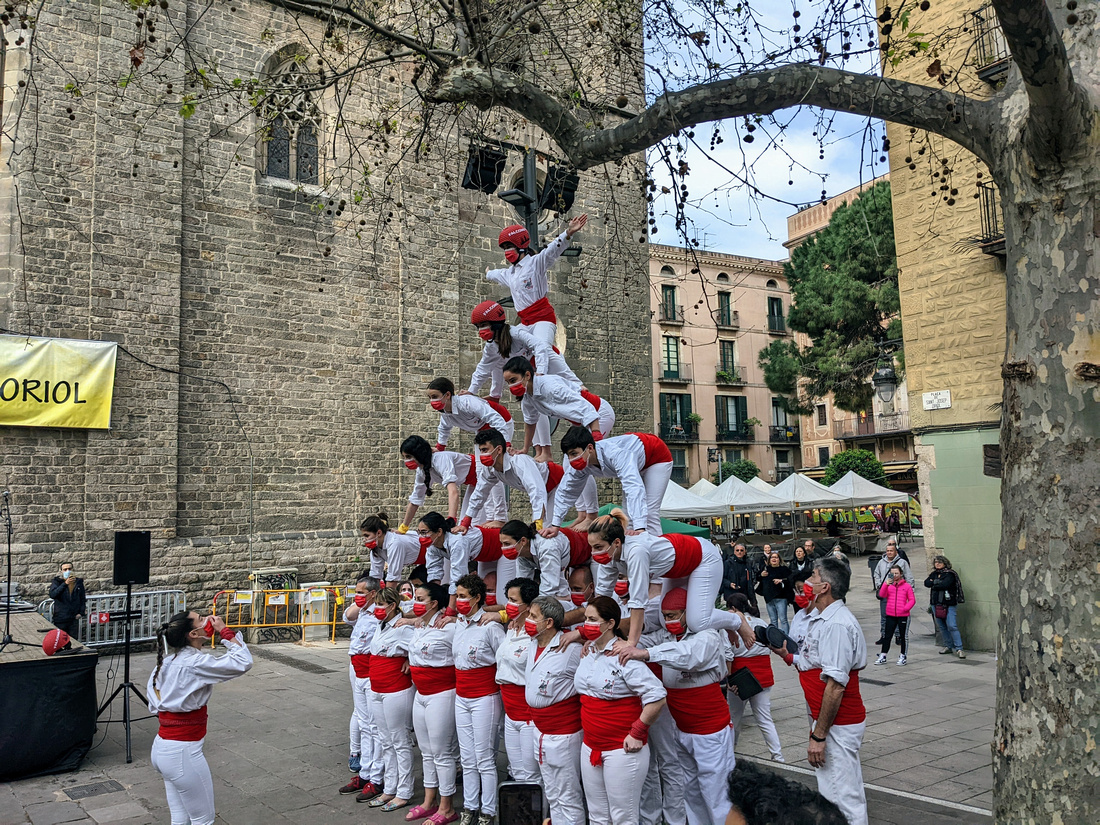 Onto the dancers -- all shapes and sizes of costumes, including some of the very tall puppet people. We still have no idea what was happening, but the community sure seemed excited about festival.  Turns out the last two years were cancelled, and so this was the first time in two years they have all performed. 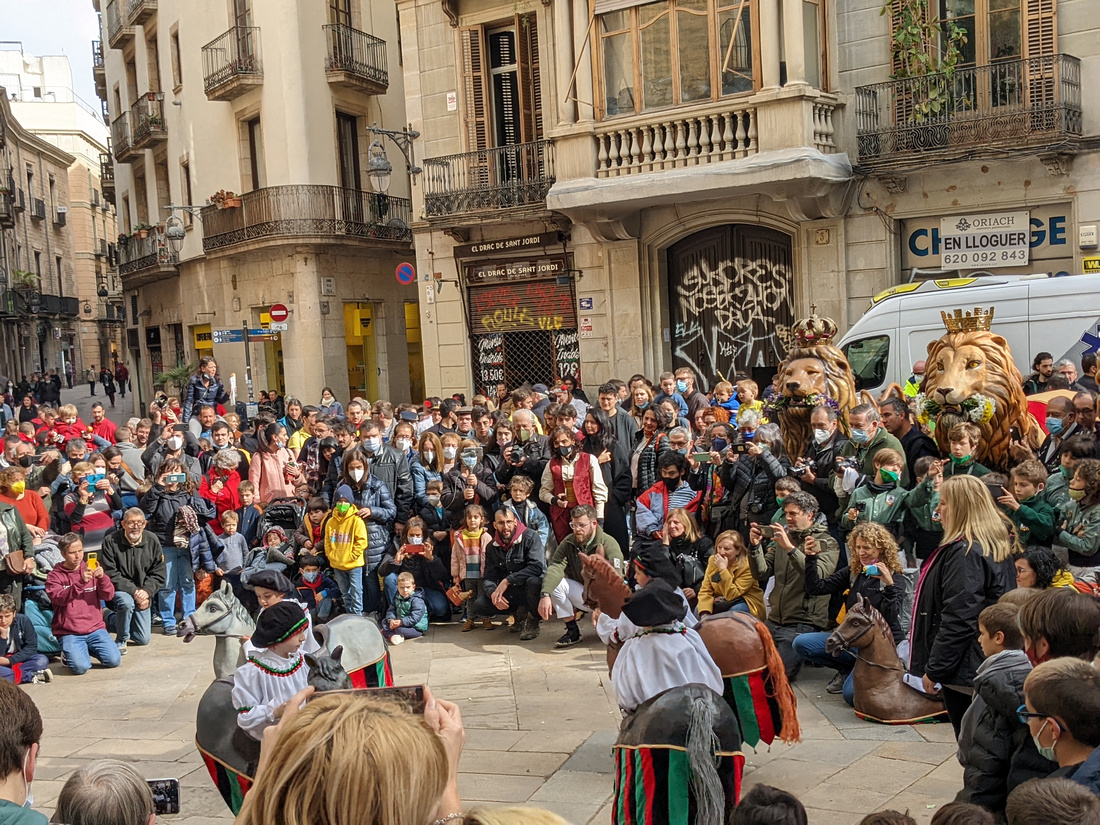 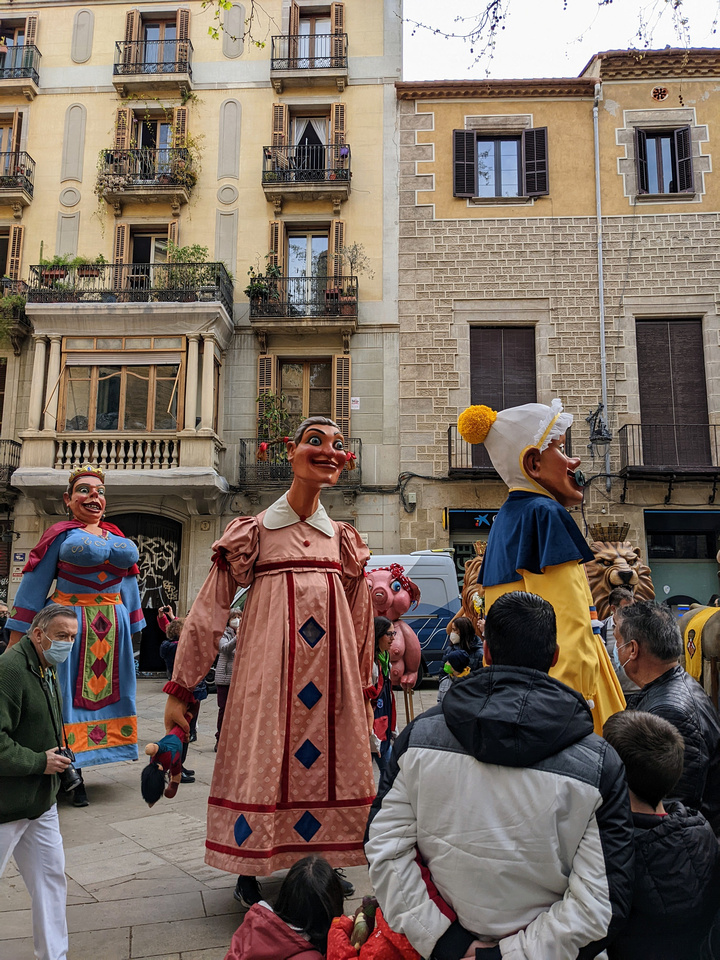 By this point we are really struggling, so we stopped to grab some tapas and try to wake ourselves up. All good choices with jamon croquettes (Ham croquets, huevos rotas con chorizo (Broken Eggs with Chorizo) and albondigas catalana (Catalan meatballs).  Coupled with some 'full fat' coke, and we are refreshed. 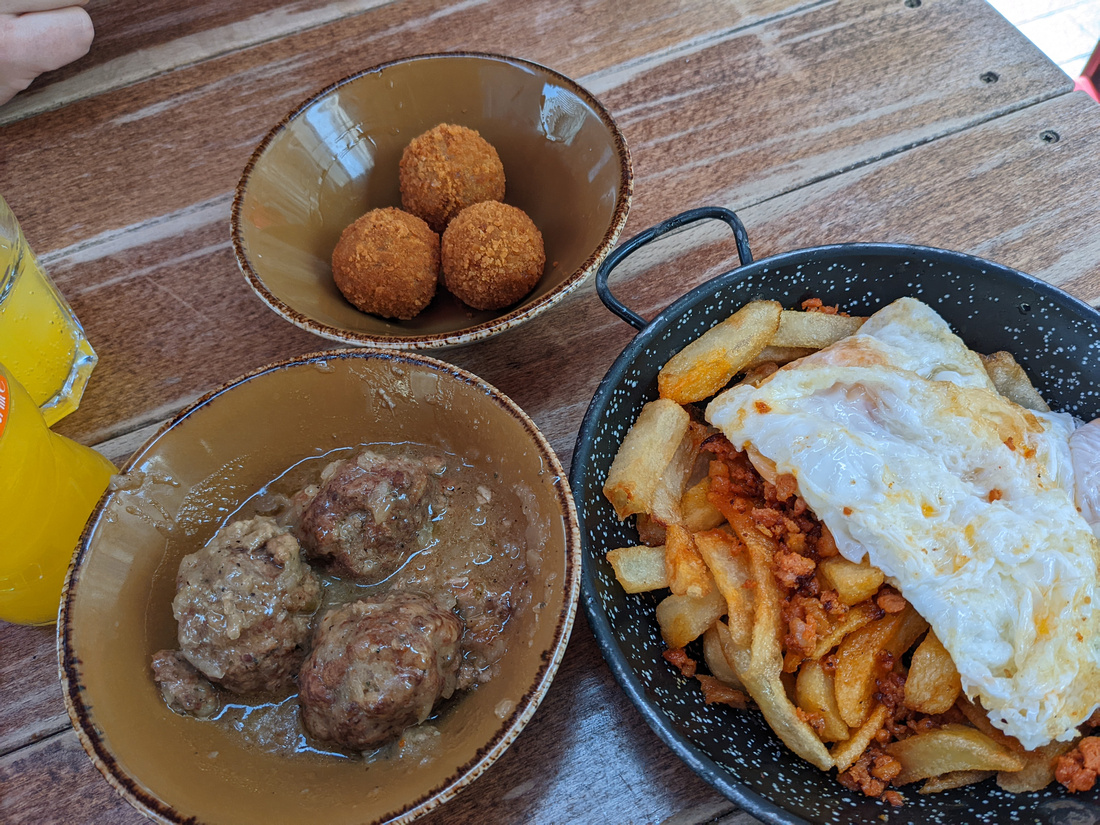 Off to the Barcelona Cathedral where we stopped to listen to some traditional Catalan music watching everyone dancing.  To Parc de Ciutadella and a wander over to Sagrada Familia.  Because Barcelona is known for architect Antoni Gaudi, I'll write more about him later, but Sagrada Familia is a cathedral he designed which is still under construction (construction began in 1882). 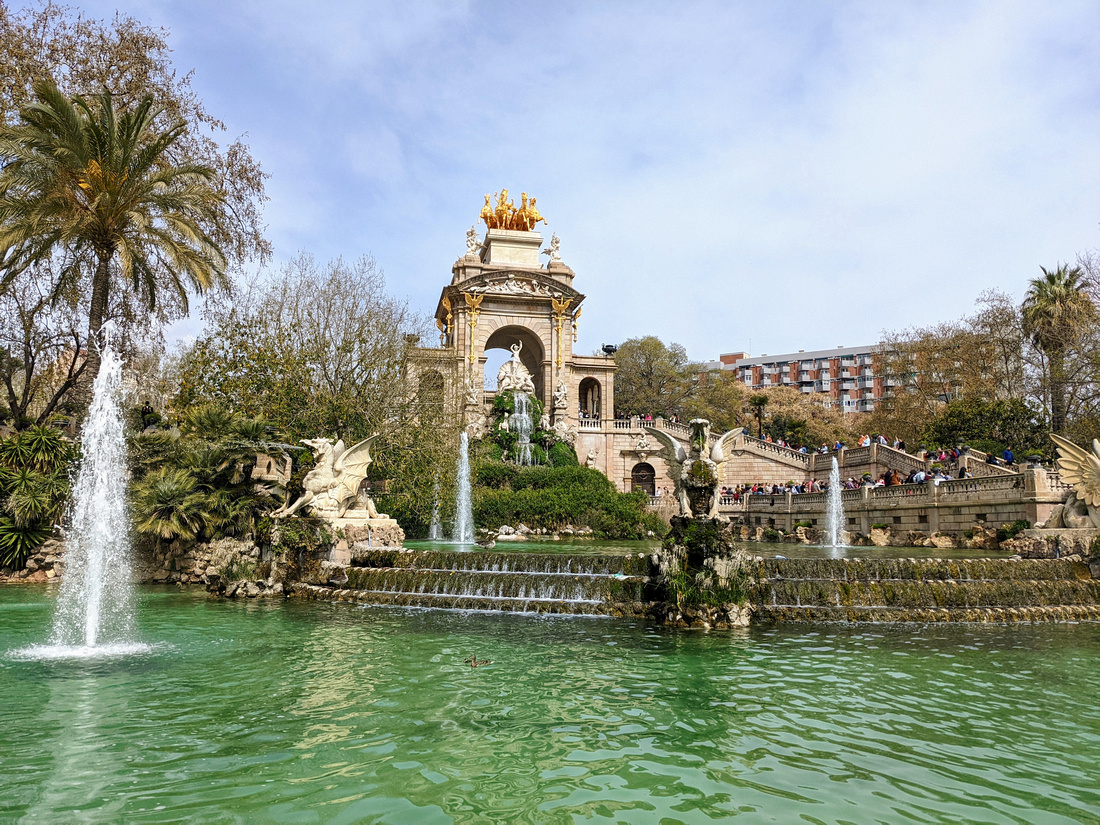 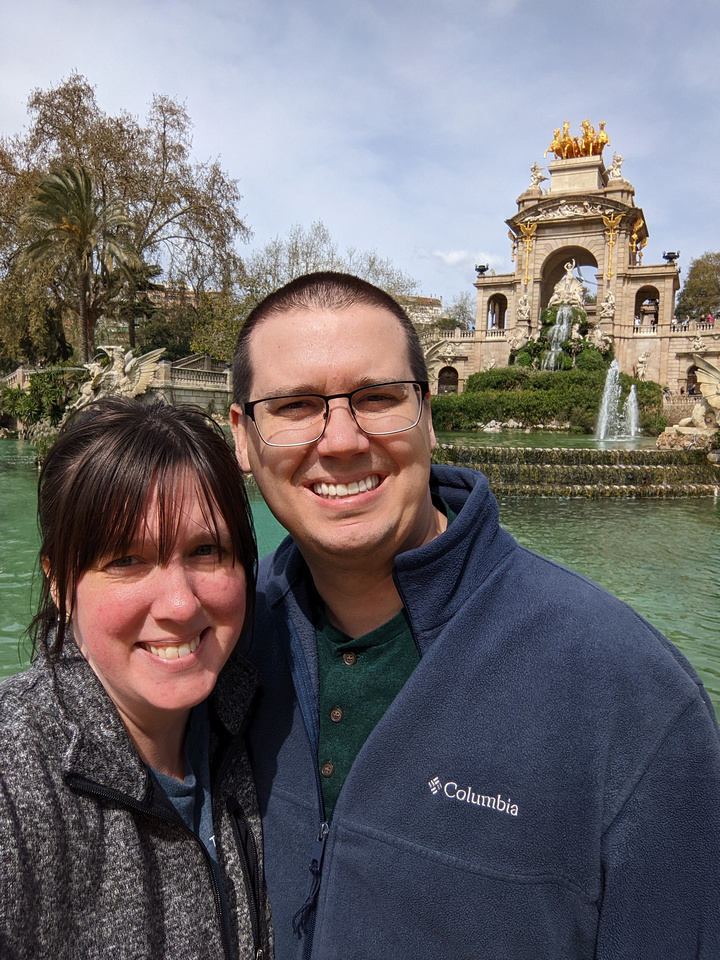 We've hit another wall, so we headed back to the hotel for an afternoon siesta (literal translation = nap). If you've never spent any time in Spain, a siesta is a midday break where almost every restaurant and store closes for a couple of hours in preparation for the evening working hours.  I feel like I belong in this country more and more, because you sleep in late, start work late, siesta in the afternoon, and then stay up really late.  Anyways, I usually cannot nap in the middle of the day especially on the first day of arriving with jetleg because I will just not wake up.  We set a number of alarms to make sure that didn't happen, so we could go back out before the sun went down. Boy was it hard to get up though.

We ended our day walking along the beach and grabbing dinner at 100 Montaditos.  We discovered 100 Montaditos on our last trip to Spain and talk about them all the time, so when we saw there was a spot in Barcelona, we knew we had to go back.  While there is nothing fantastical about this place, it introduced us to Tortilla de Patata sandwiches (tortilla is basically a Spanish potato omelet) and these changed our lives. While we haven't seen Tortillas in the US, when we were living in the UK, I practically lived off of these things -- either cooking them for lunch or eating them on baguettes like the restaurant serves. Sooo good. Plus they have dessert sandwiches which is chocolate bread served with something sweet inside (think Oreos, chocolate bars, etc).  I had a chocolate strawberry one which may have changed my life a second time. 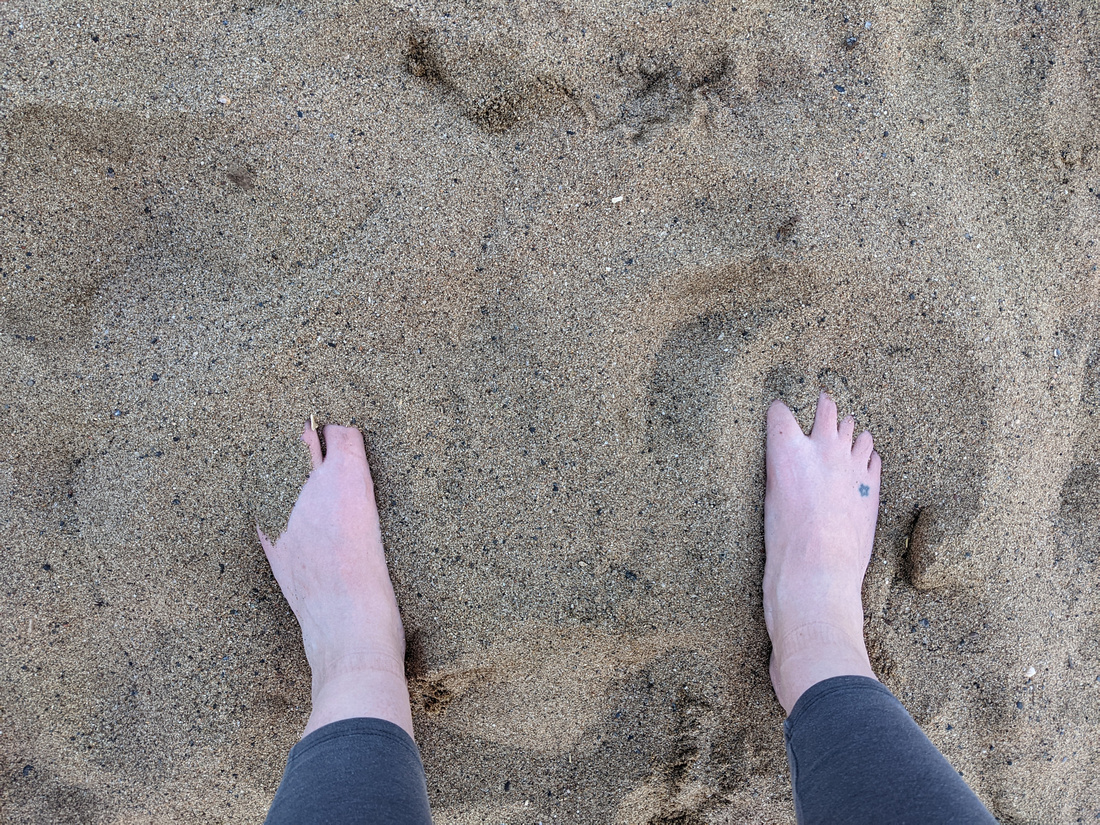 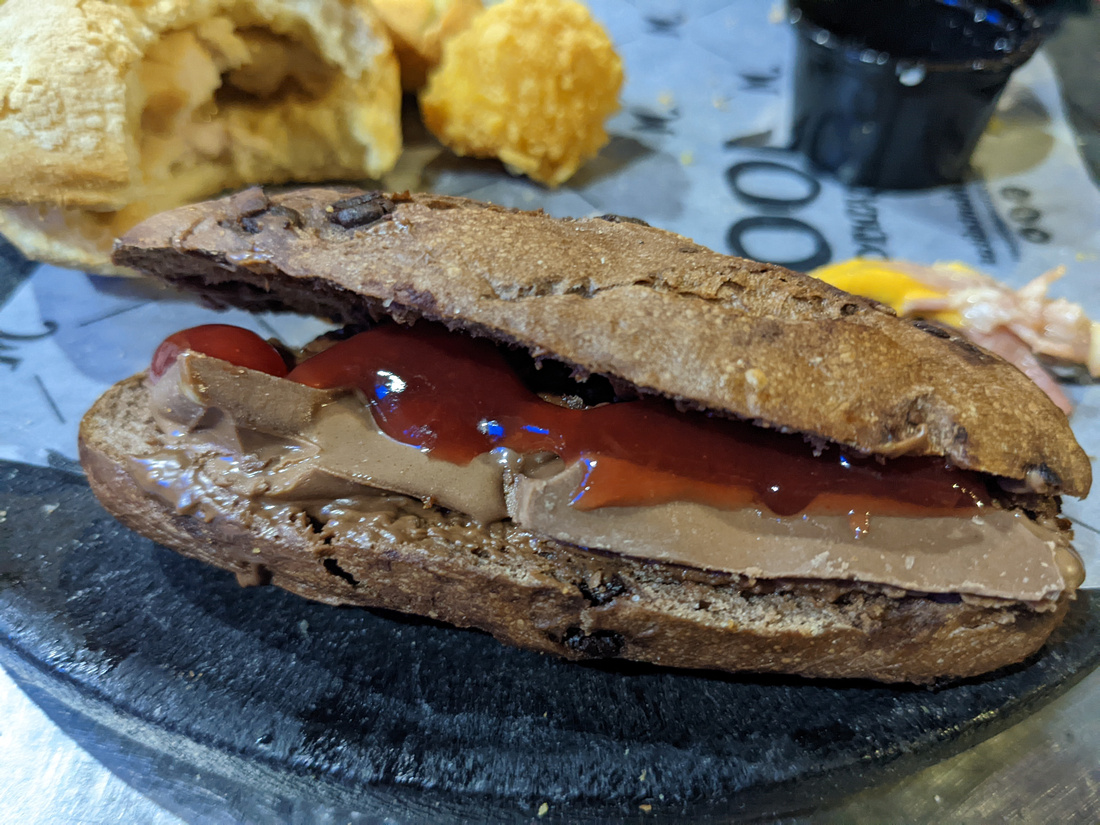 Now exhausted and full, we head back to our hotel having been awake for a whopping 33 hours (started at 8am EST - ended at 10pm CEST) with just a couple of unrestful nap hours in the middle).

Tomorrow we continue to explore Barcelona.

Mamacita(non-registered)
I'm so excited for you to be wandering again. I sure did miss reading about your travels. As far as 'we will figure it out' ... One of the fun parts of having wanderlust is just figuring it out. You Got This. Looks like a great start to an amazing adventure. Love Ya, Mamacita PS ... Eat your greens and take the granola bar for later LOL {Hugs}
No comments posted.
Loading...
Subscribe
RSS
Recent Posts
Christmas in the Netherlands Madrid, oh Madrid A day of religion Goodbye Barcelona, Hello Toledo Let's Talk About Gaudi To the Mountains! More Barcelona Our Spain Adventure Begins - Barcelona Christmas in the Big Apple Eating Our Way Through NYC
Keywords
ex-pat our journey to india london paris wales Taste of Europe Ireland/Scotland Honeymoon Darla's Dream Trip guatemala Pacific Northwest D.C. Dominican Republic
Archive
January February March April May June July August September October November December
© Wandering with Mr & Mrs Ennis
Powered by ZENFOLIO User Agreement
Cancel
Continue