Christmas in the Netherlands

We visited Amsterdam a couple of years ago during the summer and really hit all the main touristy sites -- Anne Frank House, the windmills, the red light district, etc -- you can find that trip here:

We Finally Made it to Amsterdam!
Day 2: Birthday in Amsterdam

This time we ended up in Amsterdam mostly because American Airlines didn't fly into Copenhagen, and was quite a bit more expensive to take two hops rather than just one.  We really enjoyed our time in Amsterdam the first time just wandering around the city with really long days of sun -- where this time we are visiting in the winter with quite short days of sun.  This allowed us to sleep in a bit more than normal, and meant we were back at the hotel earlier than normal (mostly cause of the cold -- not that it's not cold during the day, but at night -- ie. 4pm -- it really gets cold). Not sure if this helped with our jetleg or made it worse, but we pretty much were adjusted by day 2 despite being up for 36 hours straight the first day.

So for me, we had two main objectives -- food (surprise I know) and Christmas Markets. We timed the trip well with the one weekend that the big Christmas Market was happening, and we planned to hit a couple of the other ones if we had time.

So landing in Amsterdam -- we immediately head into the city to check into our hotel, drop luggage and back out to find some food. Last time, we ate at this tiny little shop just on the outskirts of the redlight district who had Gouda cheese sauce cone frites/chips/fries. Literally would drool just thinking about it.  Sadly the place was closed :(  So we had to settle for some at a different shop.  We ended the first day eating a fresh, hot stroopwafel from the best place -- so at least we have that. 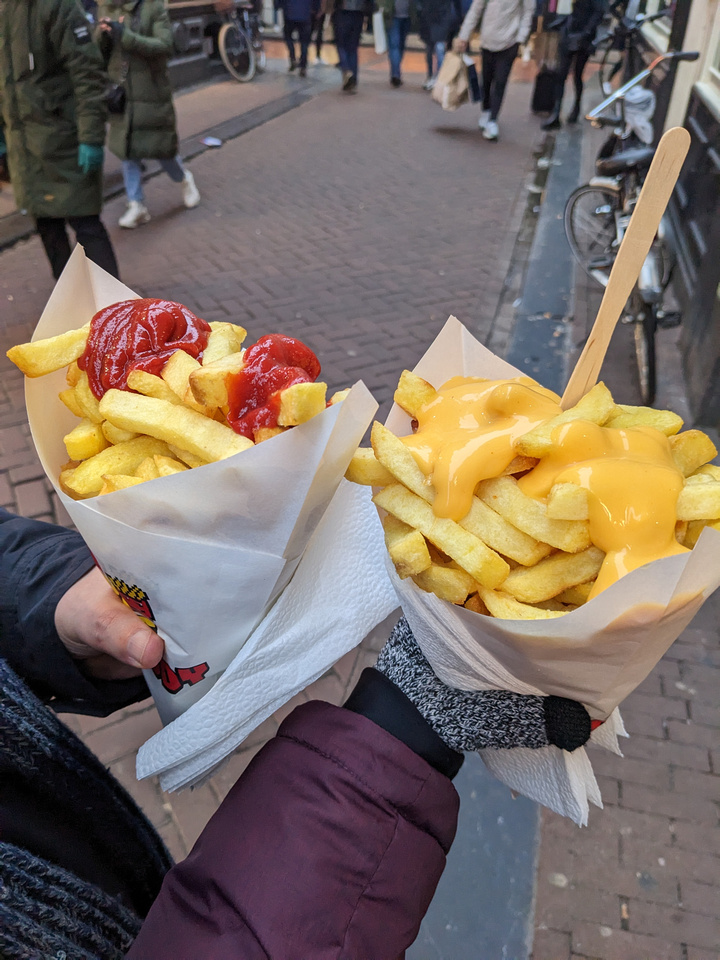 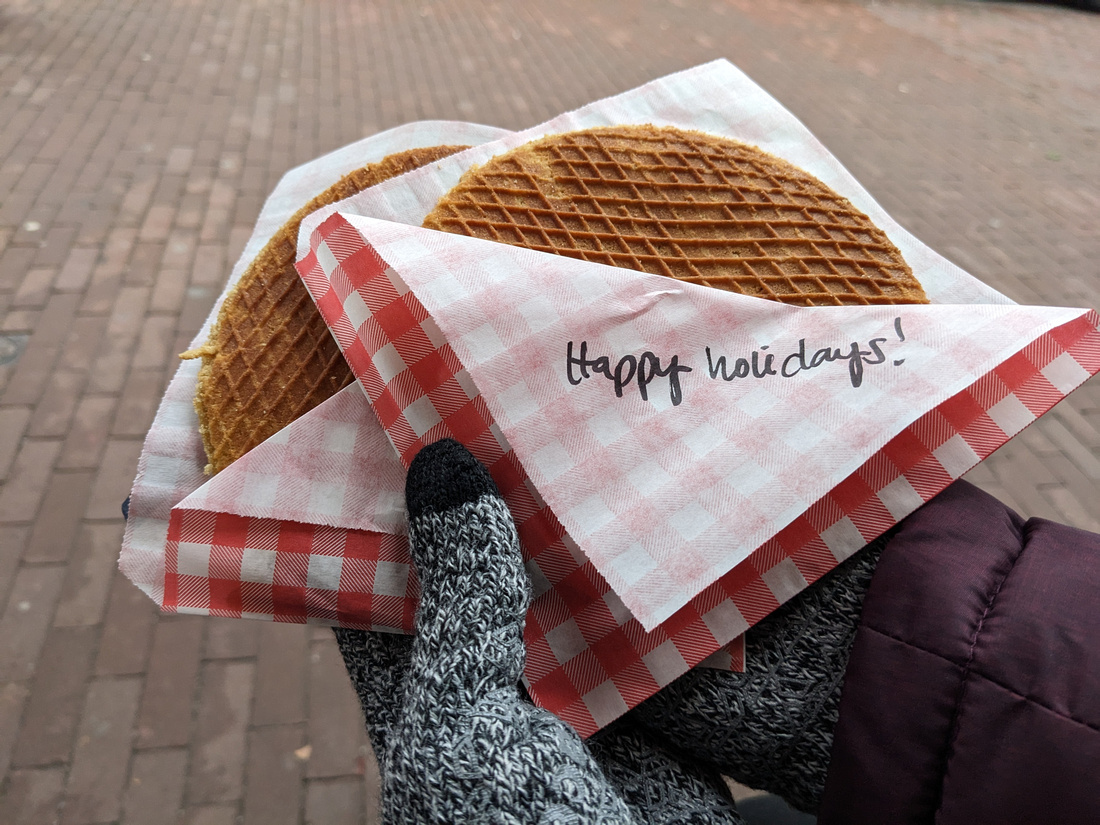 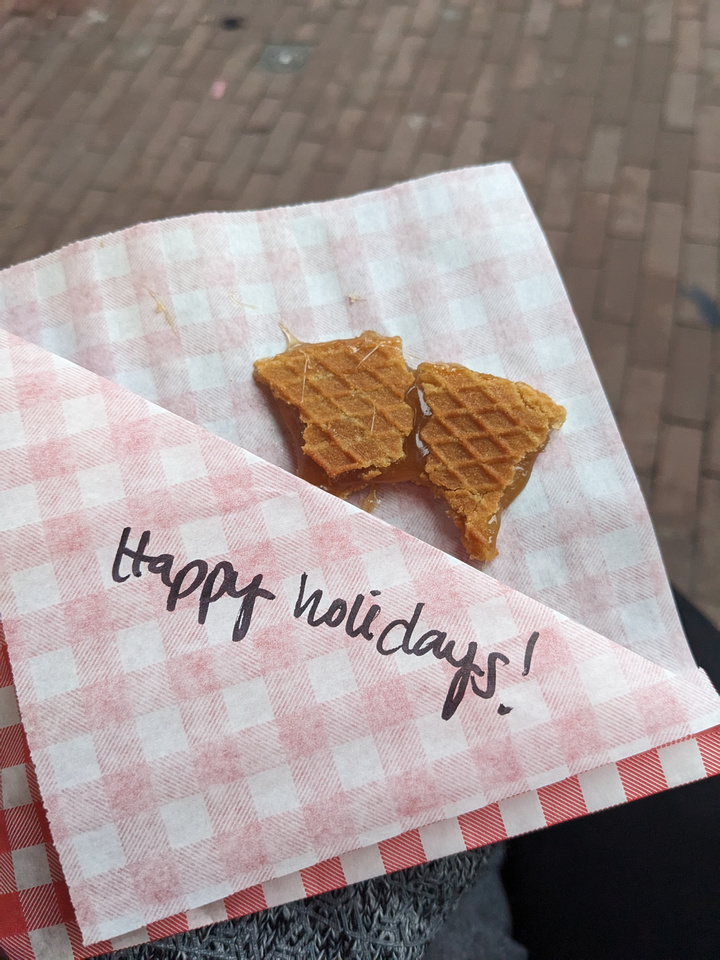 Day 2 was dedicated to the Christmas markets, so we headed to The Hague to begin our adventure, and sadly found this one to be a bit overrated. The booths seemed okay, but there was not dedicated/traditional Christmas Market food.  And because we were starving, we had to eat fast food as we were running to the train to the next market.  We do always end up at McDonald's one of the meals in each country to try whatever is native on the menu -- in the Netherlands they have a sandwich called the McKroket which is basically a big potato/meat/chease croquette on a bun.  It looked quite mushy, but Kevin seemed okay with it. Though I'm not sure he'd order it again if he had the chance. 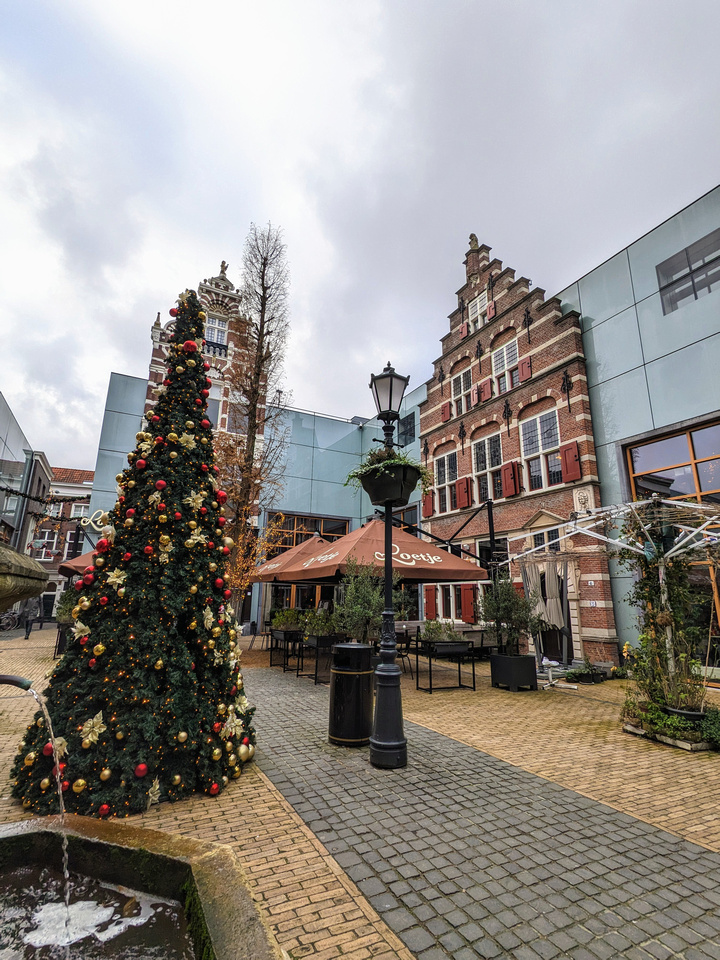 Next Christmas Market was huge -- and extremely busy since it was only open one weekend a year.  Plenty of booths for shopping, people dressed up in period costumes, plenty of food options -- still not traditional Christmas Market food, but we are at least getting a bit closer.  We ended up with hot chocolate and a roasted ham sandwich by the end of the night. 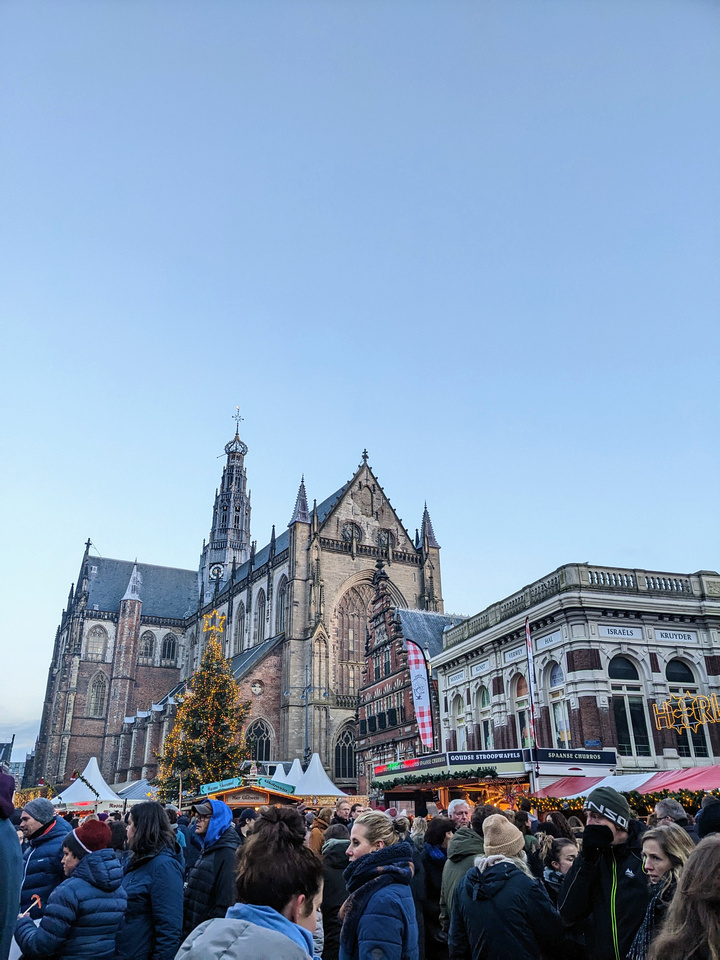 We also made a friend while standing in line for the sandwich -- Paolo travelled to Amsterdam from Brazil to visit some friends for a couple of weeks.  Paolo had completed his university degree in Texas, and has travelled pretty extensively across Europe.  Lovely guy who I think appreciated hearing English behind him.

Some other random highlights -- when we arrived in Amsterdam, it was soooo foggy. Like we all were very startled when the plane landed cause we couldn't see anything and had no idea we were close enough to the ground to actually land.  The fog remained all the first day and never burned off -- so everything just looked hazy and almost smoky.

We obviously went to a Lego store (or two) on a specific mission. But I'm not allowed to talk about that -- but because I don't want to forget -- Kevin was too chicken to ask the worker about it, so I walked up to the guy and asked if they had the secret item to which he replied with a very surprised but excited reply of 'we dooooooo'.  He checked back in with us later in our visit as well just to make sure we had everything -- I suspect they don't get a ton of requests since it's not well known, on top of us being random Americans asking. 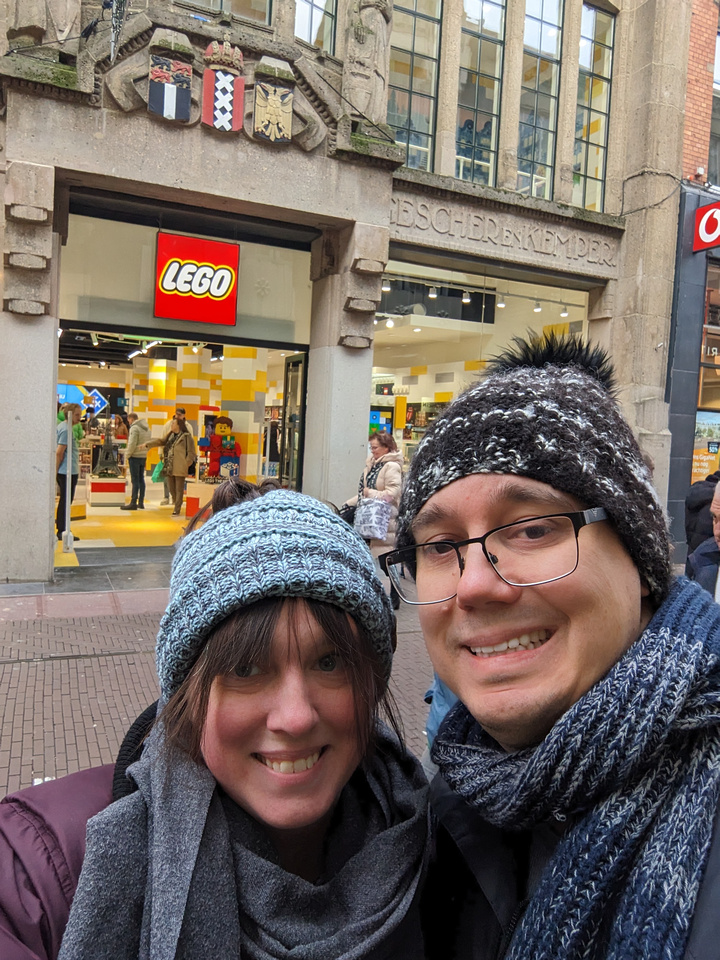 And as always, the canals are always a hit since we don't have anything like them, so it was fun to see them again. Next stop is Denmark.  More Christmas Markets. More Lego. More adventure. 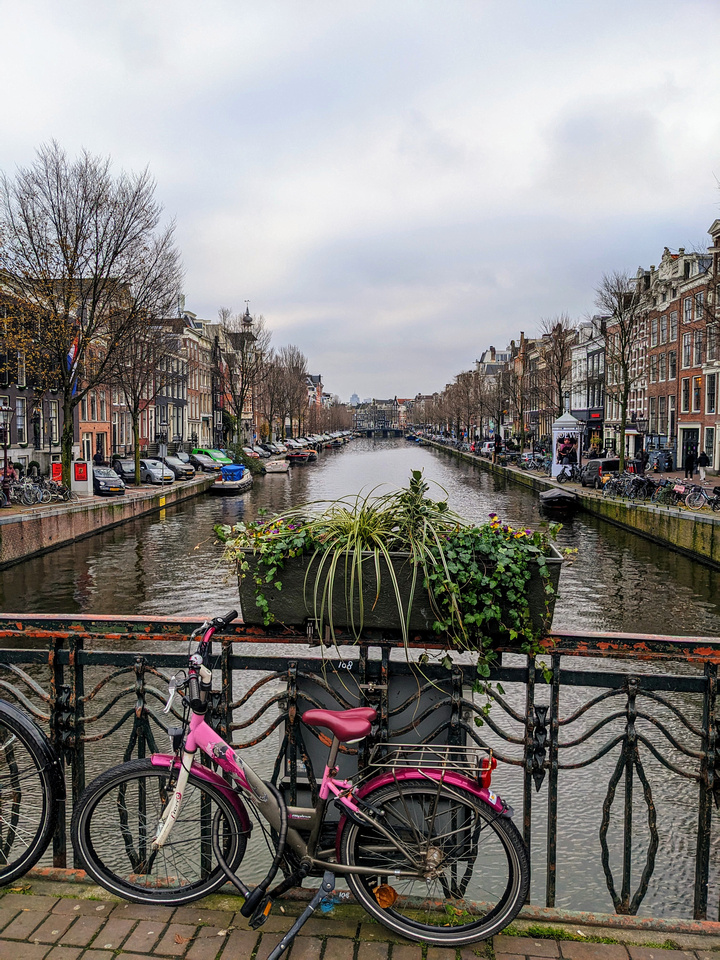 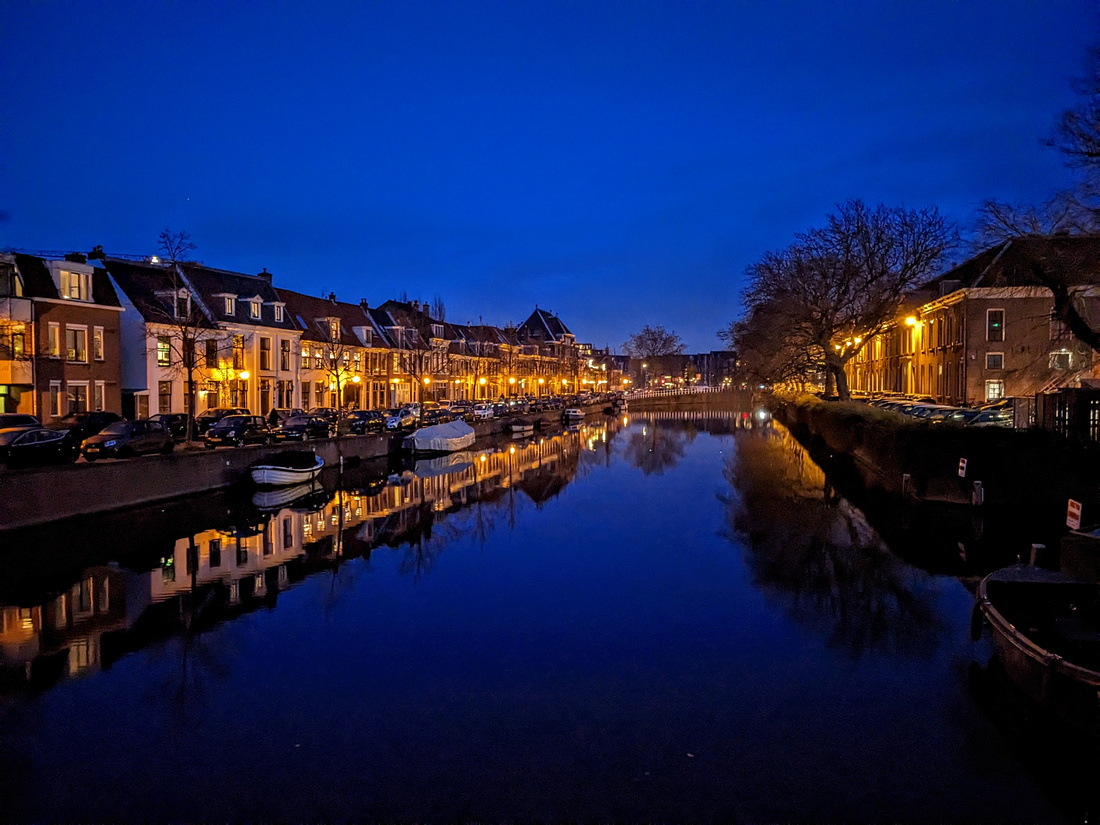