Eating Our Way Through NYC

Fine diners, we are not. Even at home we prefer either cooking at home or fairly non fancy restaurants.

When we travel, we typically are even more casual and gravitate to hole in the wall local places or "street food". This trip was no exception -- we *might* have eaten more street food outside than we ate inside. Most of that is for the Christmas Market food. While not quite German market quality, we did try some new and unusual foods from all over the world.

Arepas (South American - found at the Bryant Park Christmas Market) -- while these were definitely not traditional arepas like I had in Guatemala, they were similar. Cornbread like base stuffed with mozzarella and topped with avacado, chilli and cheese. Of course, Mr Ennis skipped on the green stuff he finds repulsive. 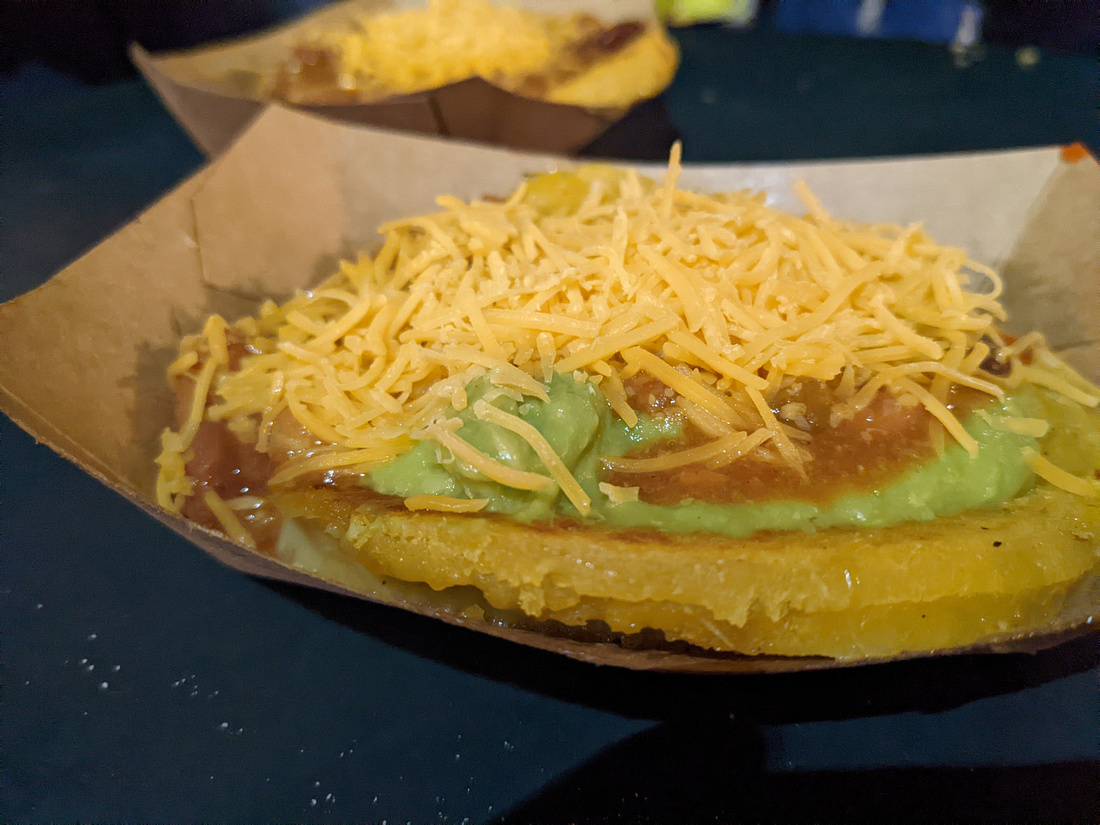 Fried Perogies, chicken soup and sauerkraut brat (Eastern Europe and German - found at the Union Square Christmas Market) -- these were both solid choices. Perogies were so good and their traditional soup was delightful. Albert (the rat Mr Ennis befriended and named also enjoyed this meal). 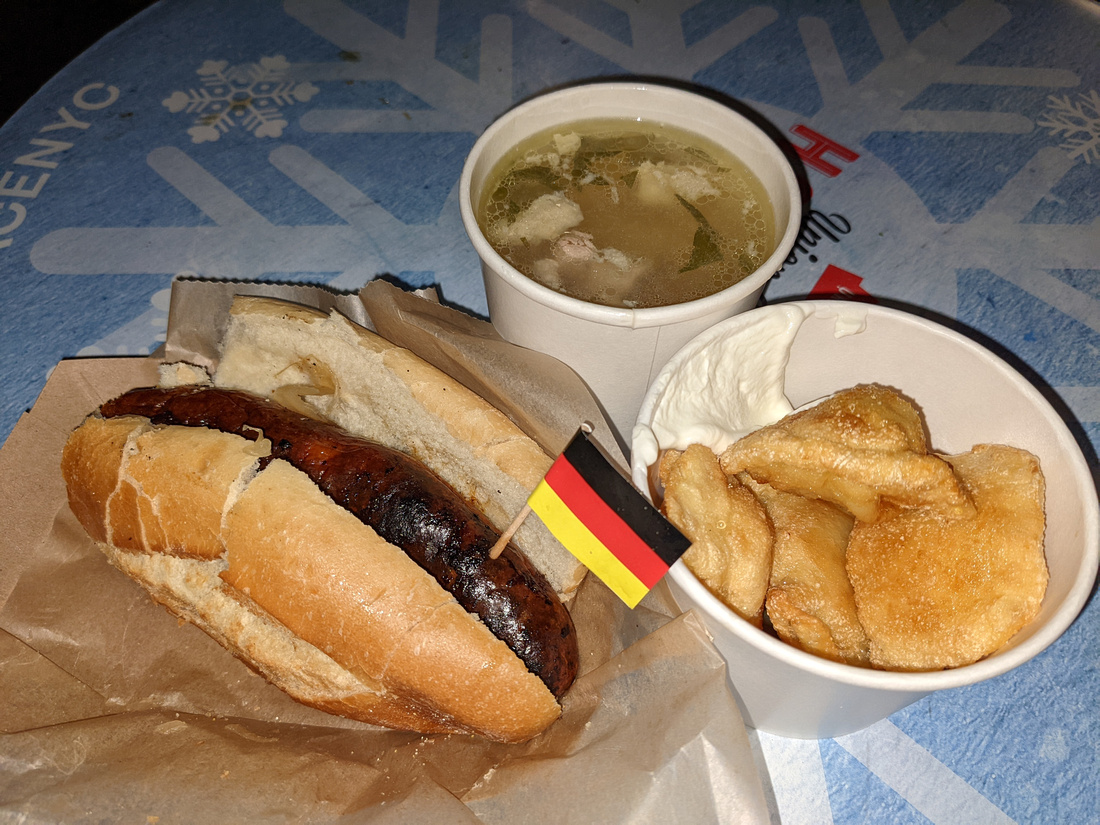 Bombino (Italian - found at the Union Square Christmas Market) -- this is a stuffed donut. I chose Nutella cause...Nutella, duh. The base had an almost lemon flavor to it which was unexpected. 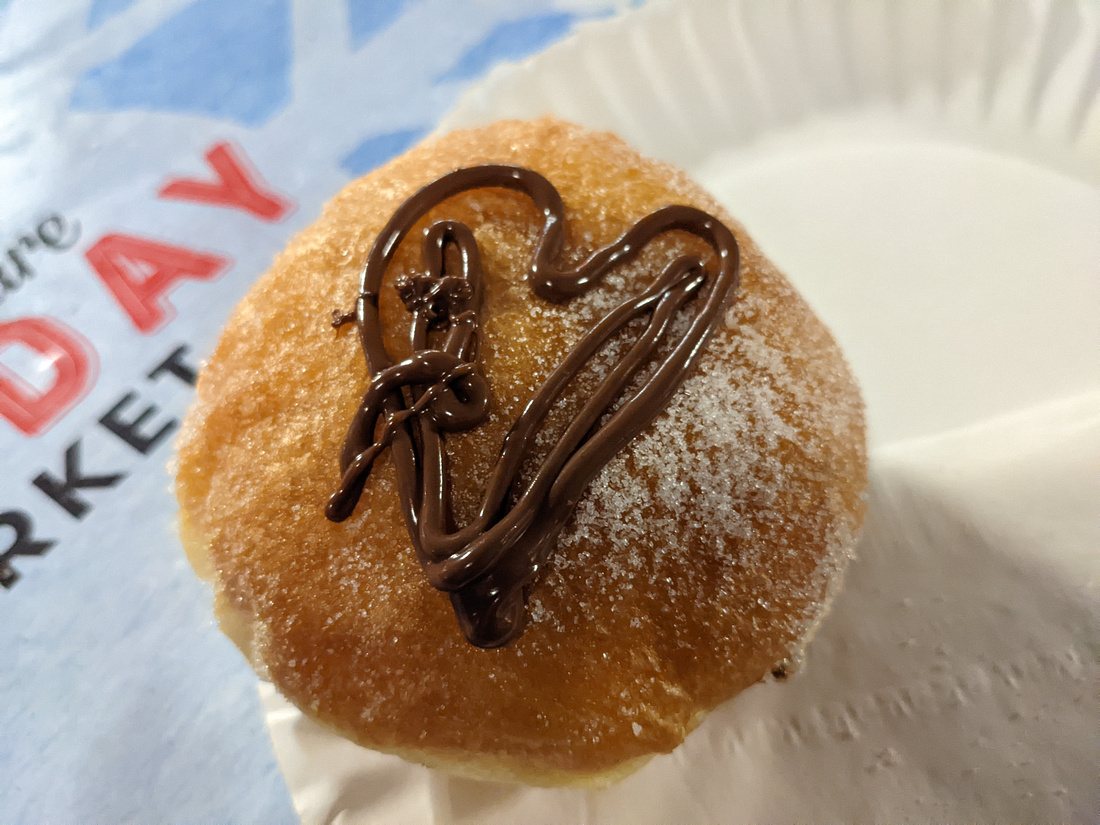 Pineapple pork buns (Chinese - Mei Lai Wah in Chinatown) -- I specifically scouted out pork buns and found this place known for its pineapple pork buns. The whole place is so cheap at less than $2 a bun and the pineapple buns had an almost cookielike topping giving it even more pineapple flavor. Such an odd mixture that really worked.

We ate these in the park which was full of people playing cards, traditional games and music. The instruments being played were a cross between a violin and guitar - playing a mix of traditional music from China and Americanised Christmas songs like Frosty the Snowman. A really interesting experience. 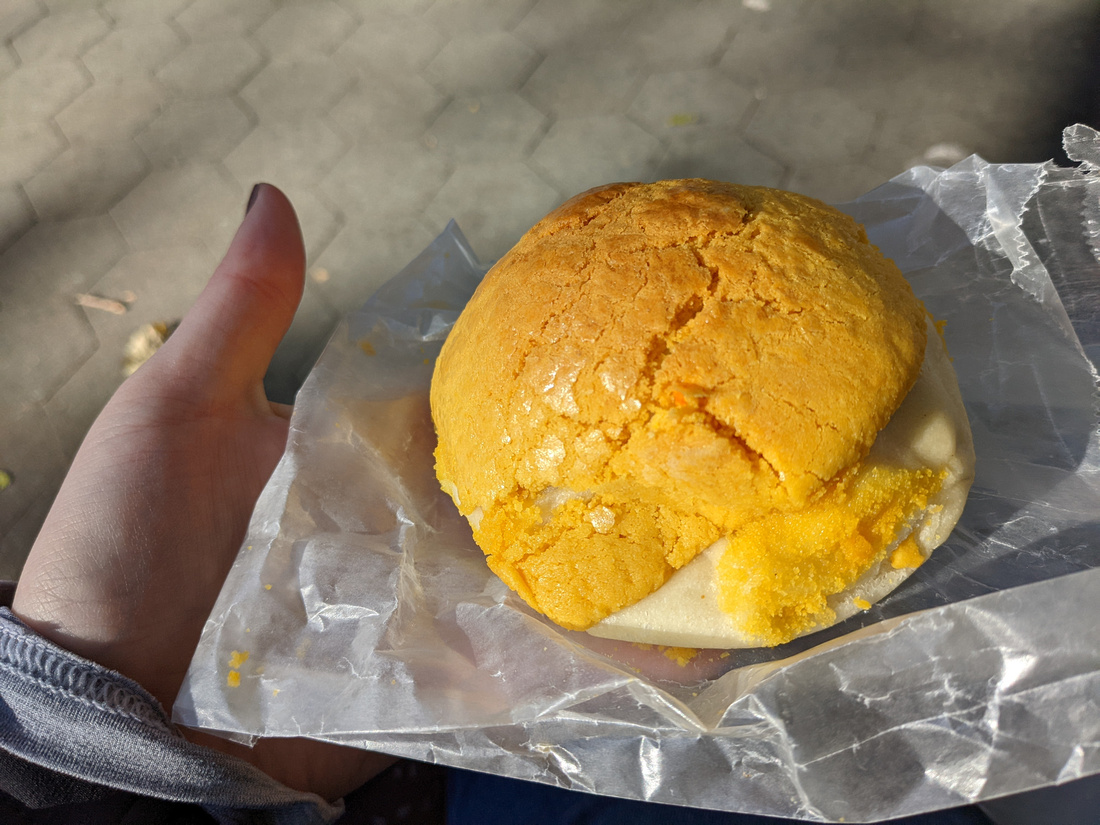 Grilled Cheese and Tomato Soup (Melt) -- you know when you just want comfort food. Melt was perfect providing grilled cheese, tomato soup and tator tots. One of the few places we ate inside (showing our vaccine proof of course).

Hazelnut Lobster Tail (Carlos Bakery) -- yes, that Carlos Bakery from Cake Boss. No, I didn't do it on purpose. Sometimes you are just desperate for some breakfast food and wander into the first bakery you see. Picked up a lobster tail which if I'm honest was not my favorite. It was oddly crunchy. 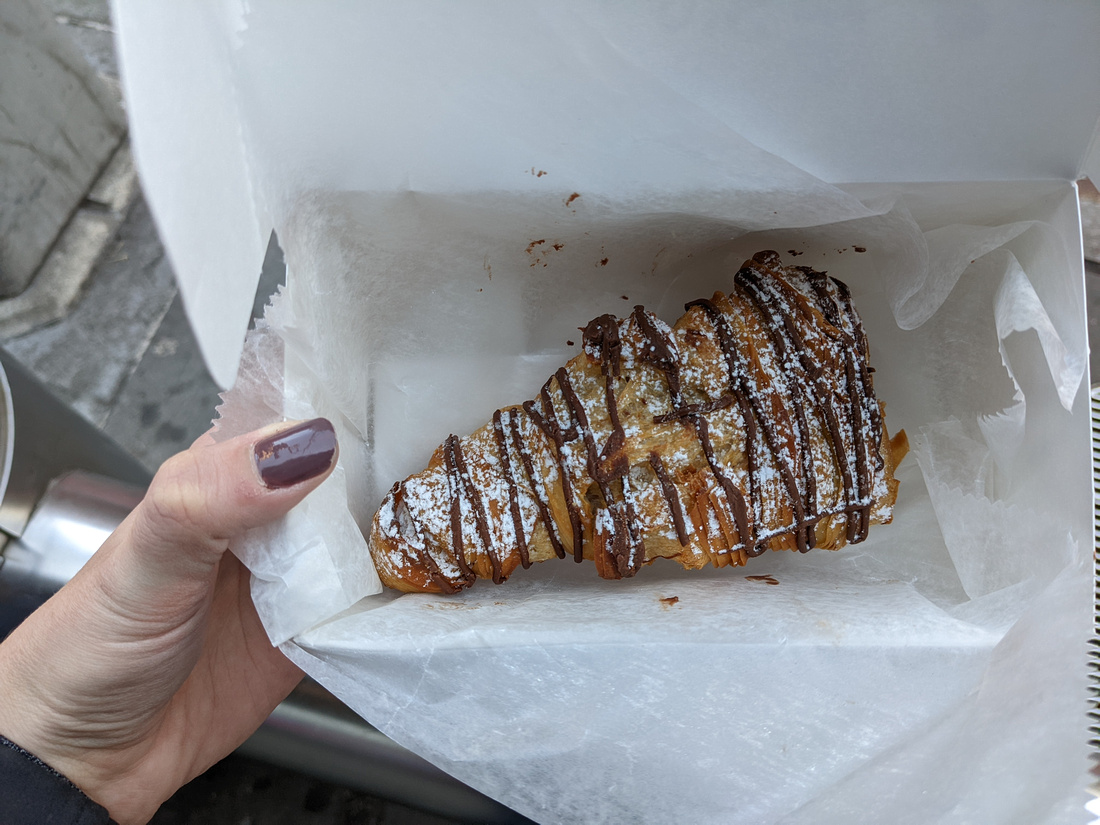 Philly Cheese and Quesadilla (more food at the Bryant Park Market) - sensing a theme? We ate a lot of market food. This was an evening we were exhausted and since this market was so close to the hotel, we wandered over and tried them. 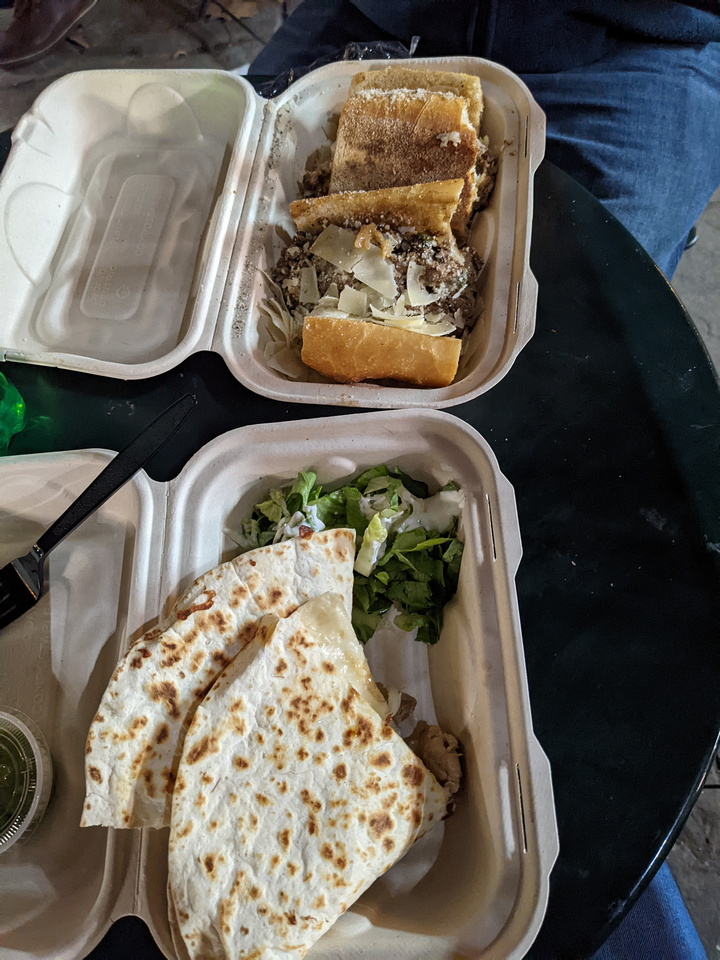 Oreo and Chocolate Cheesecake (Eileen's Cheesecake) -- this is another I specifically sought out because their reputation says they are the best. And it was very good cheesecake. Perfect size as an after lunch dessert. 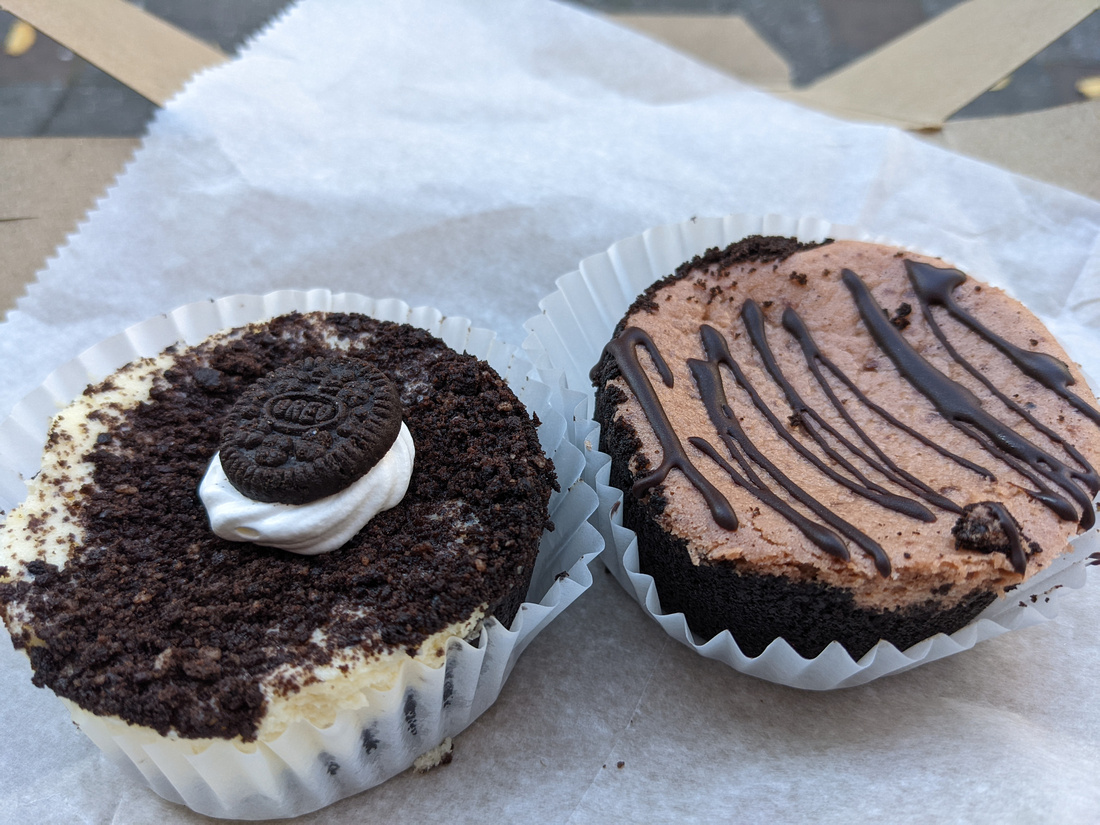 Bagel with Smear (Zucker's Bagels) -- more research which led me to one of the day at bagel shops in NY. Now we only tried one, so I can't say for sure. But it was very busy and pretty delightful bagel with smear. 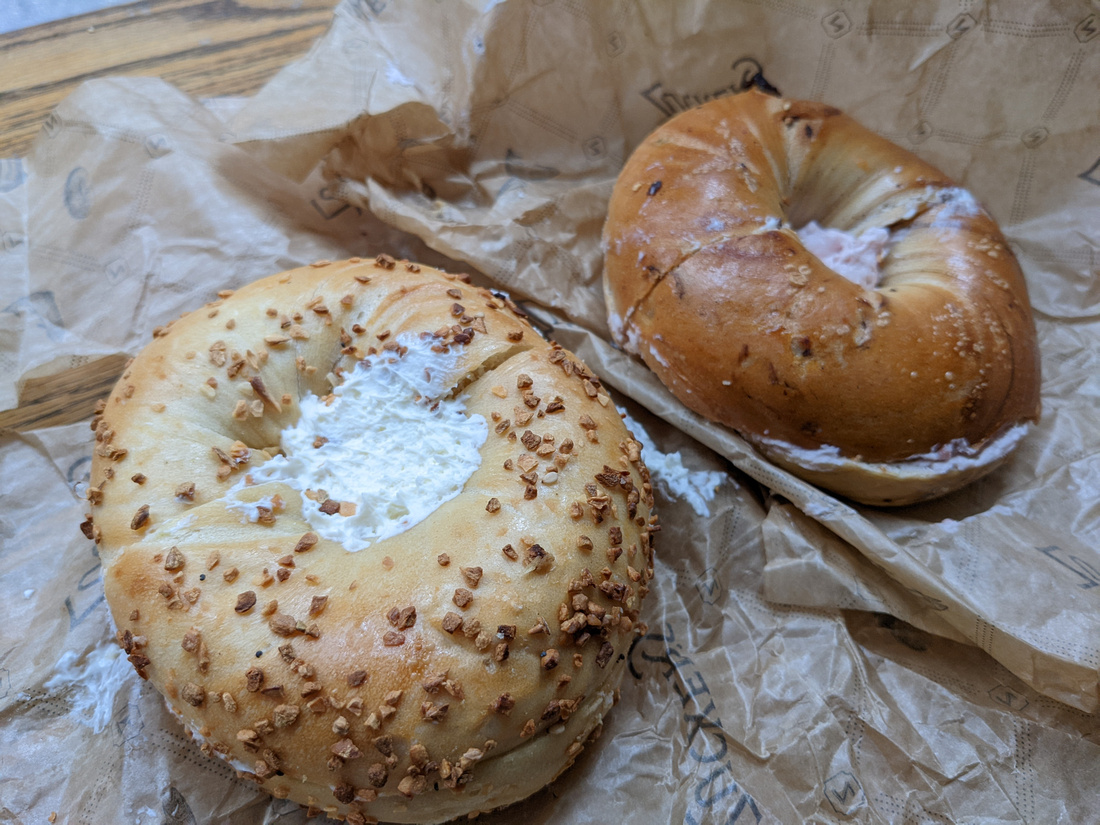 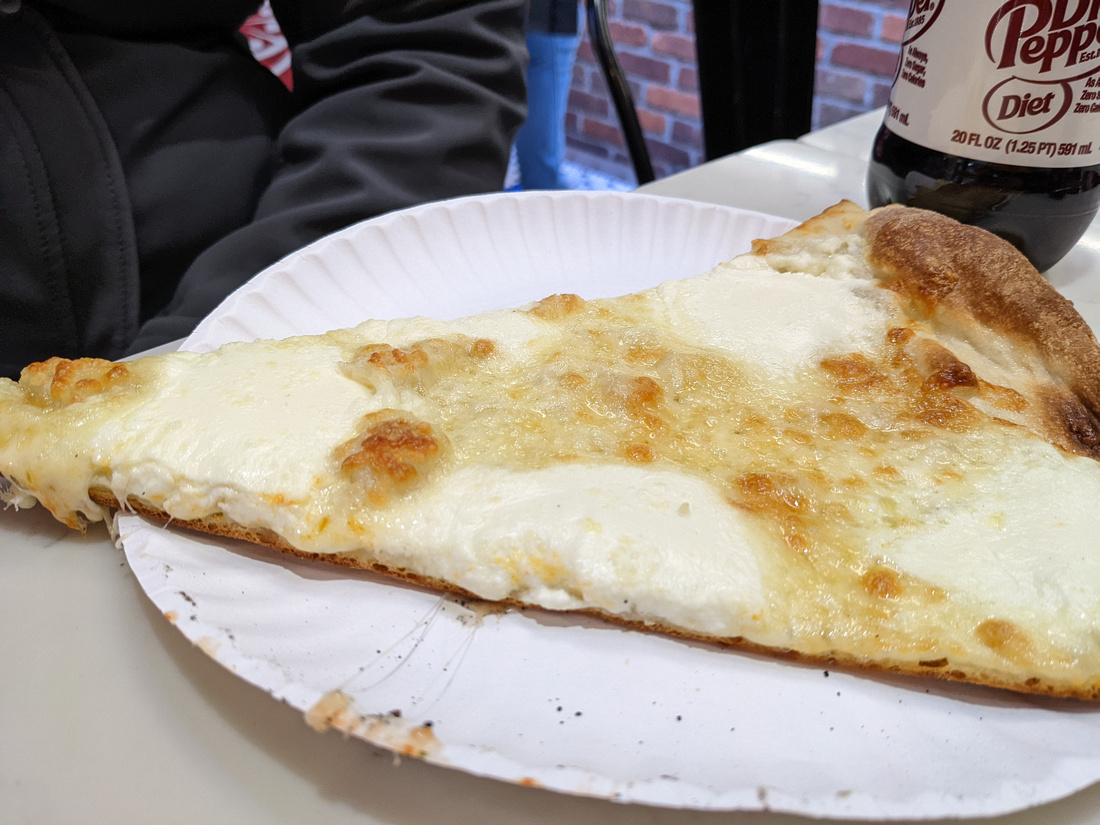 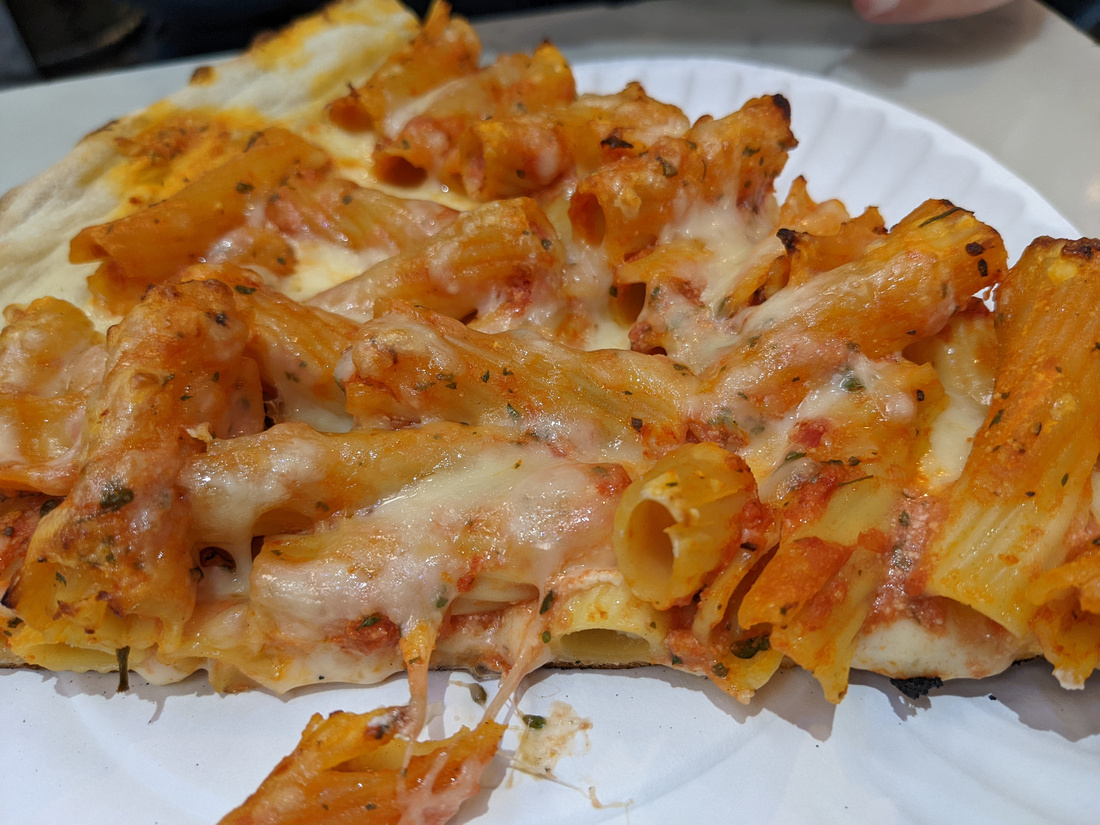 So there you have it, four days of street food with a restaurant or two sprinkled in there.

To read more about our adventure in New York: Being a Tourist in NYC and Christmas in the Big Apple.

To see all the pictures from our trip to New York, click here.