Our rooftop has a 360 view of the island and because the island is so small, we can almost see across the entire place from our roof. So this morning we watched the sun rise above the sea before we headed north. 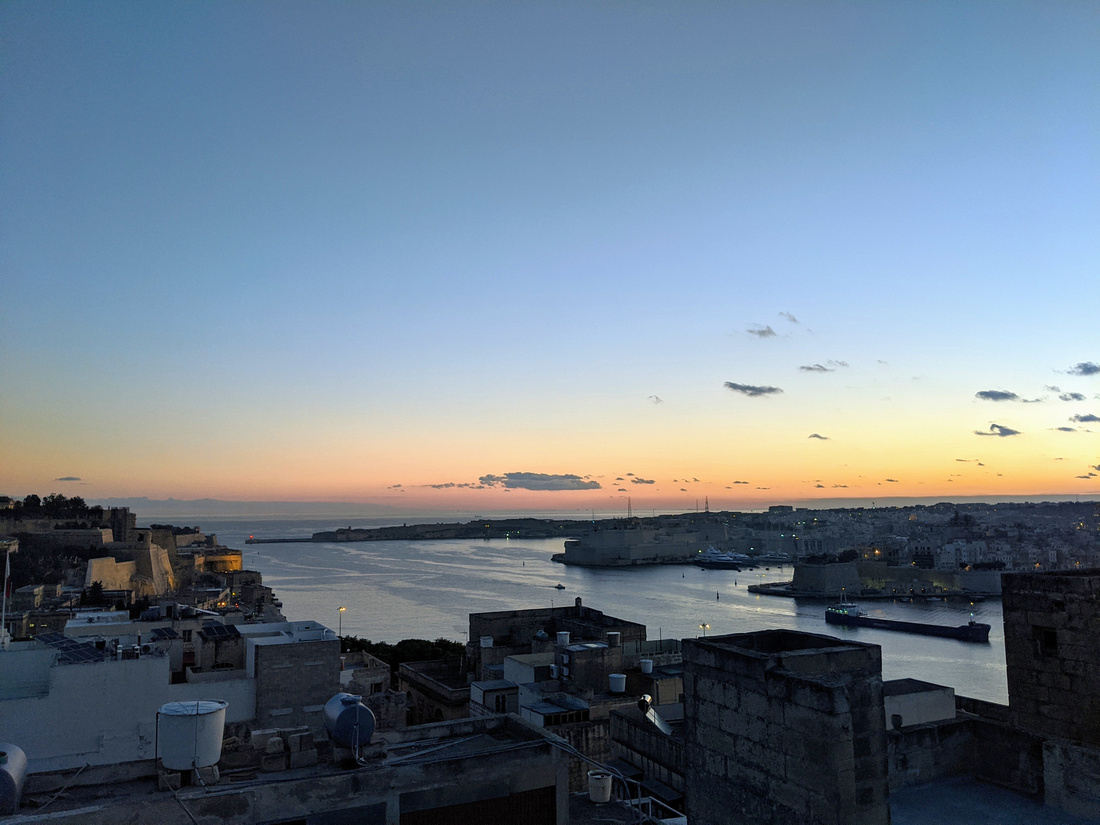 A little over an hour by bus and we arrived at the Cirrkewwa ferry port. This ferry will take is to the neighboring island, Gozo, which is affectionately referred to Malta's prettier sister. We decided this is likely because less people live on Gozo.

As we were walking into the ferry, I had a rather aggressive tour bus guy trying to sell me tickets to the hop on hop off bus in Gozo. Normally, if you keep walking past them saying 'no thank you', they move on to the next person. I suspect the mixture of slow season and my frustratingly recognisable accent, he followed me across the street and into the ferry terminal.

What's most frustrating about this interaction is that he was lying to us and we knew it! I research enough before venturing anywhere to at least know how to get there. So many other people were stopped and bought tickets from them. €20 a person! Where the public bus costs €1.50 for two hours. We probably paid €6 total the whole time we were on the island. 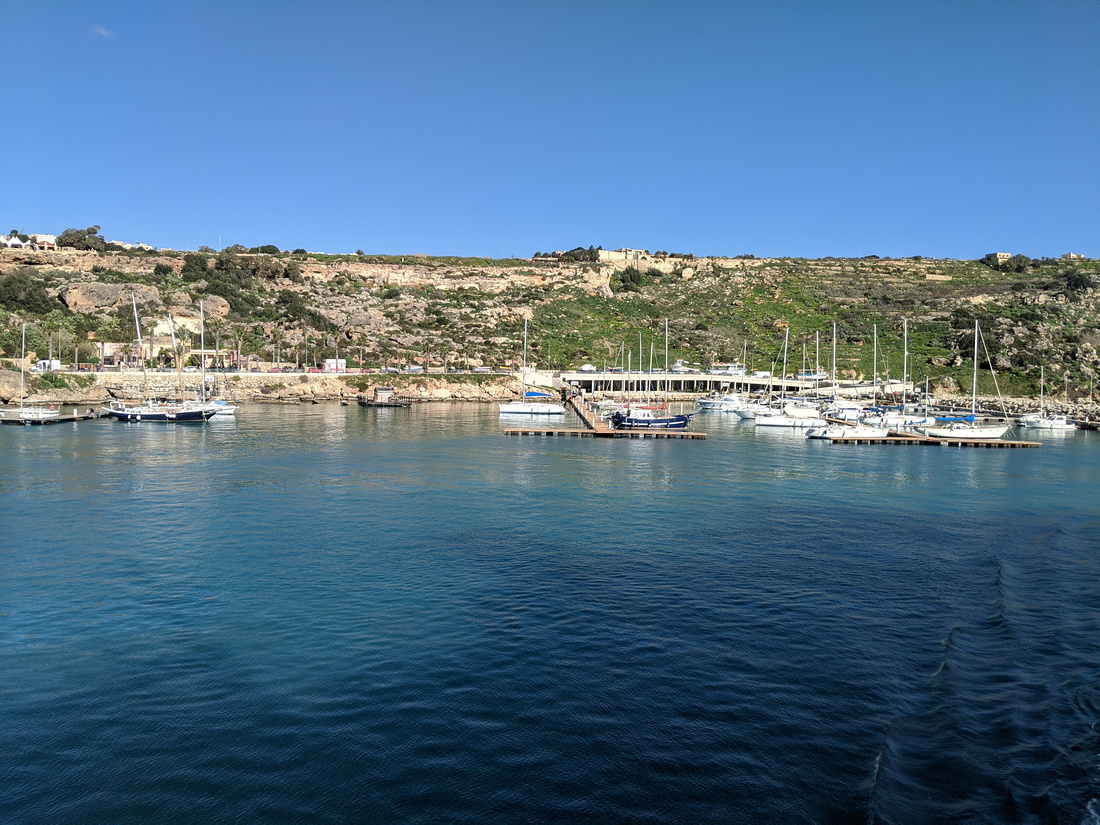 A short thirty minute boat ride, and we were walking around Gozo. Amazingly, we rode the public bus to Victoria...considering the 'local' claimed there was no public bus. Such a scam.

Before we headed into the Citadel, we grabbed some street shop pizza. Really good thick crust - we would definitely eat it again. Although Kevin's had hard-boiled egg on it which was a little weird.. 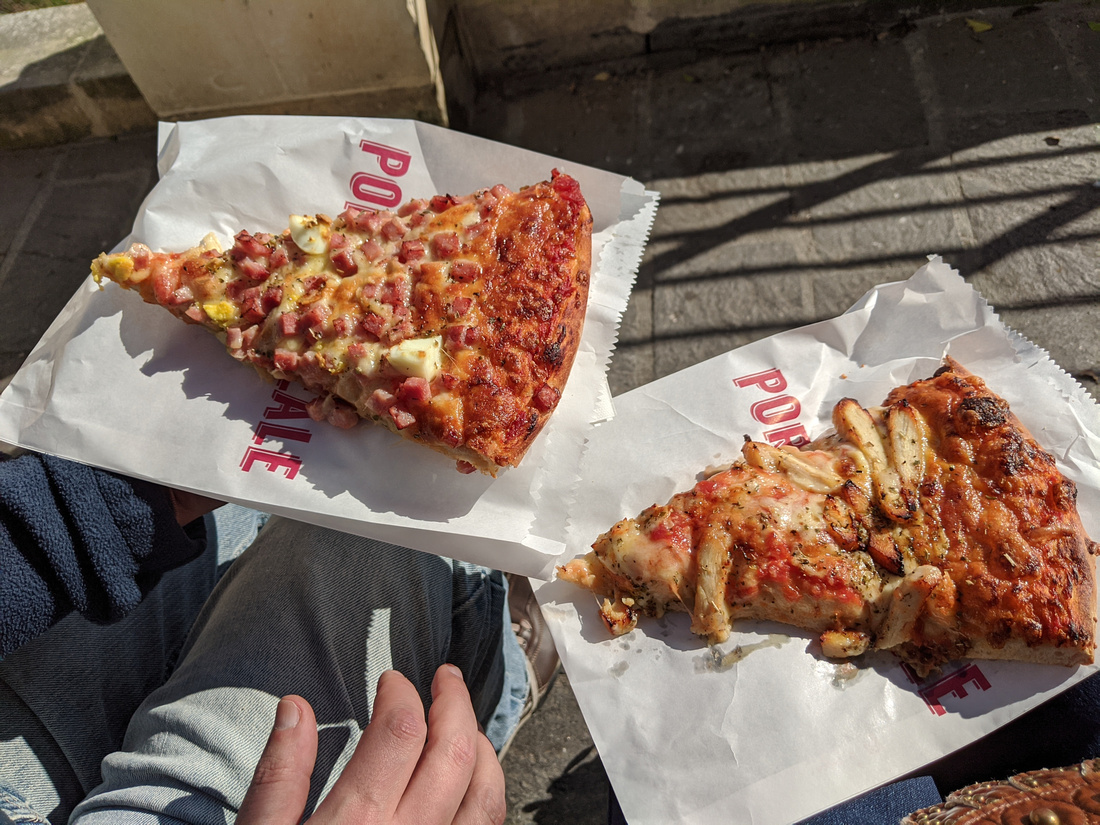 Citadel was pretty cool to wander through -- the old prison cells are always interesting to see, and the view from the top was spectacular. Back to the ferry port as that is where the trail starts for our walk along the coast. Turquoise water for days! Also hiking through so many cacti. I'm not sure that we've ever been this close to this much wild cacti. It was almost like walking through a forest. Had a nice little wander up and down the cliffs...we were able to touch the water at the bottom as there was a little rocky beach. Cool to the touch, but not cold. I can definitely see myself coming back to swim in the summer. 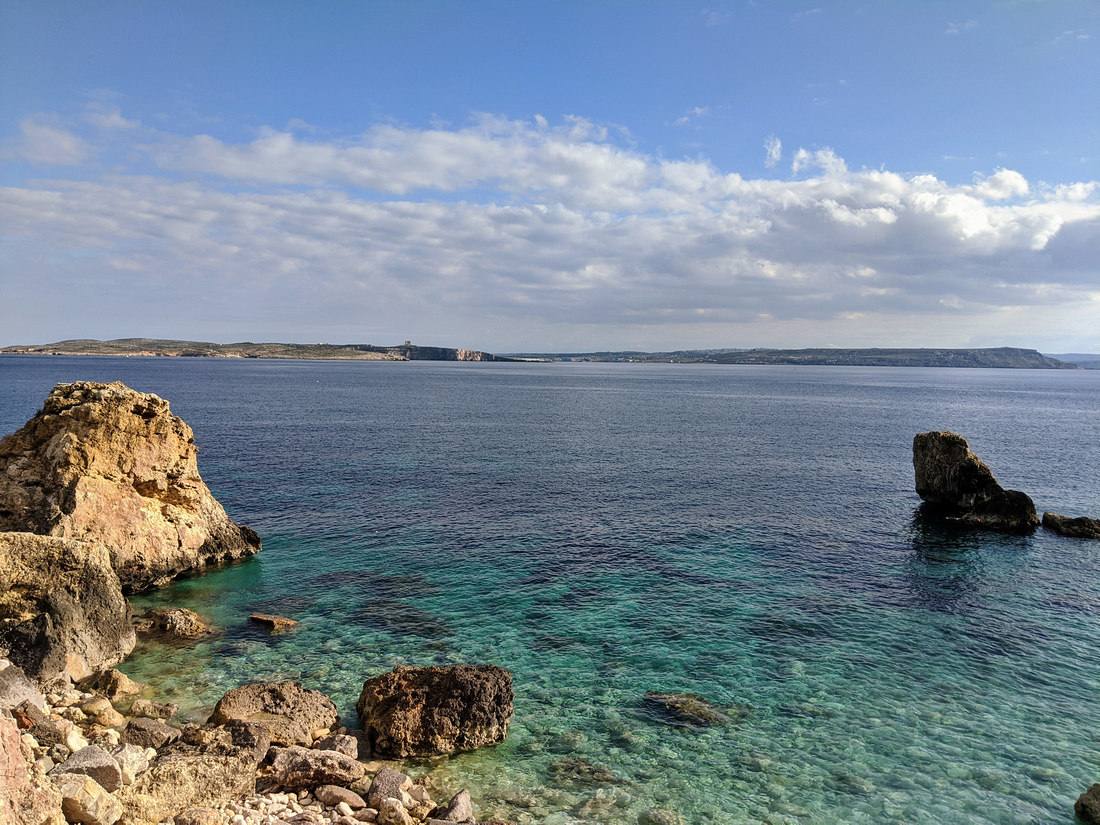 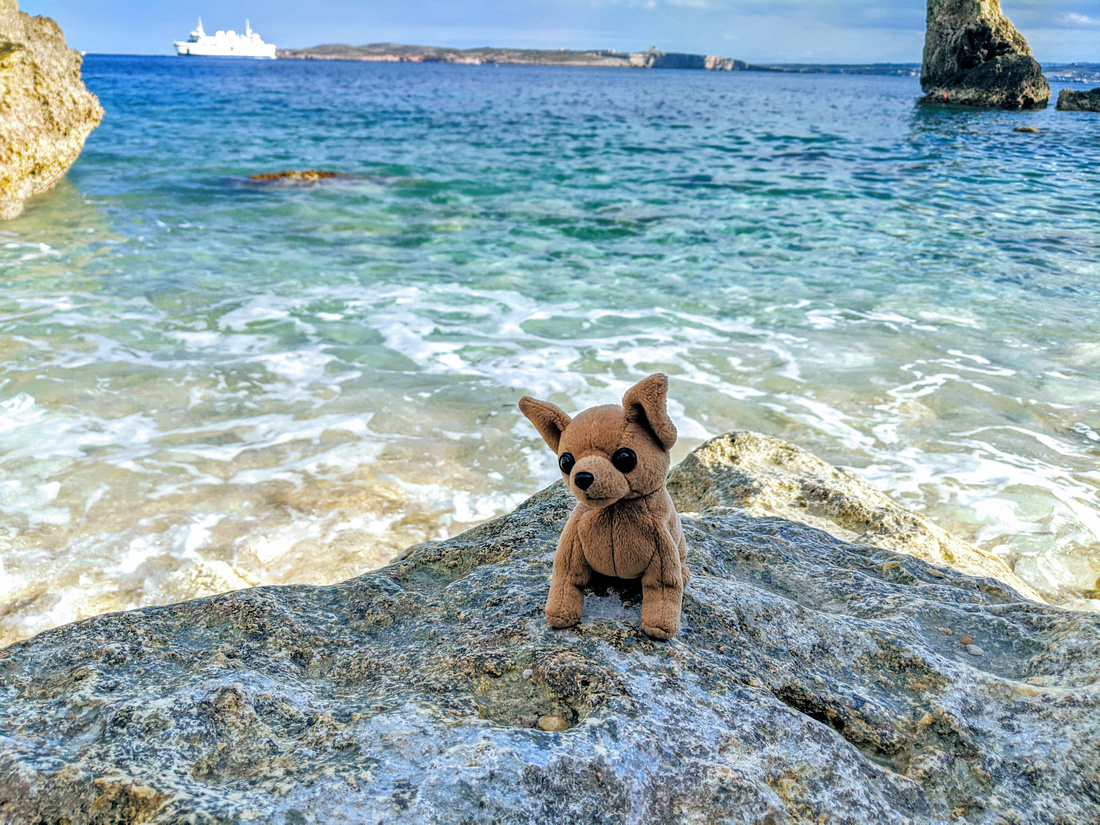 Back across the ferry and over to Mellieha Bay which is where the 1980s Popeye movie was filmed. The movie set was turned into an amusement park and was pretty cool to see from across the bay. We didn't pay to go in, because screaming children also like amusement parks. Plus we arrived right around sunset... As planned since this was supposed to be a great spot for a sunset. We did wander down to the bay and saw a bunch of jellyfish swimming around.  The sun was hitting the water and the village just perfectly (golden hour). 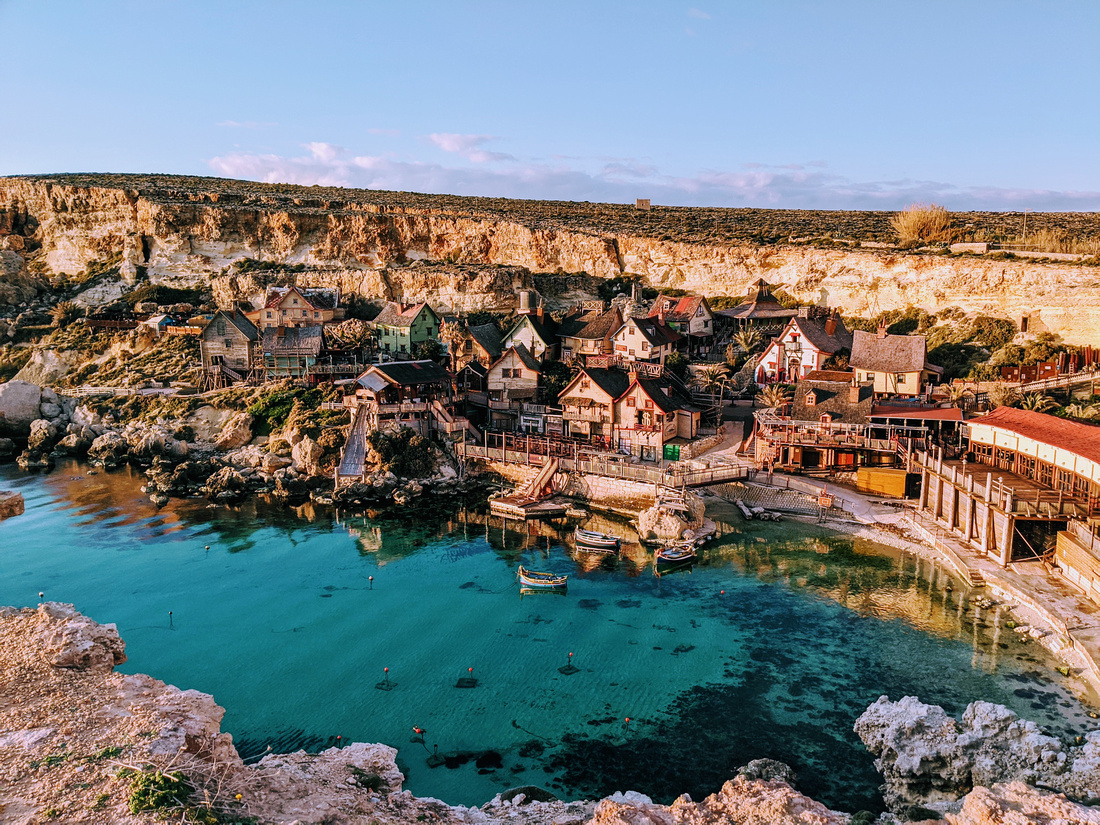 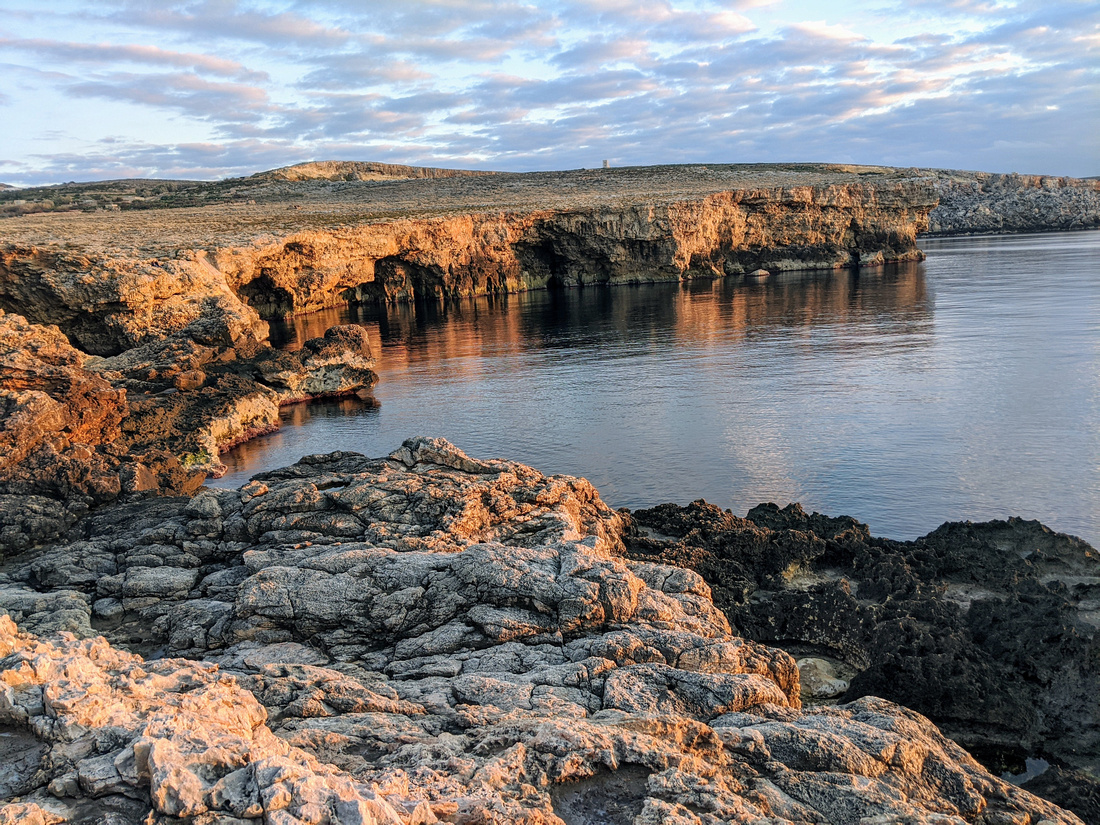 Back up to the top of the cliffs just as the sun was going down. Even though the clouds were a bit too dark on the horizon to give us the brilliant colours, it was still beautiful over the sea. An hour bus back to Valletta, and we were starving! We stumbled upon Vecchia Napoli which had lovely looking calzones on the menu. We were not disappointed either - massive and absolutely delightful. Probably my favourite thing I've eaten here so far. 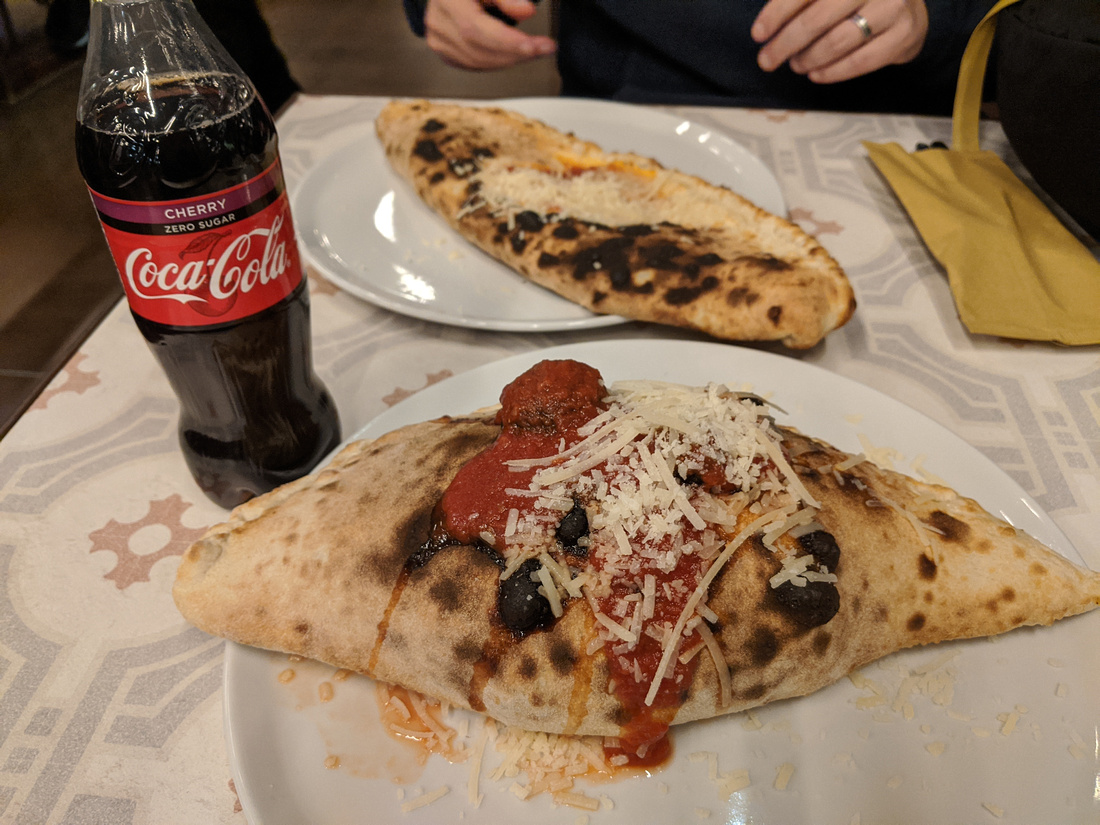 Since it was such an early morning, we were exhausted (and a bit cold!), so off to bed for us. 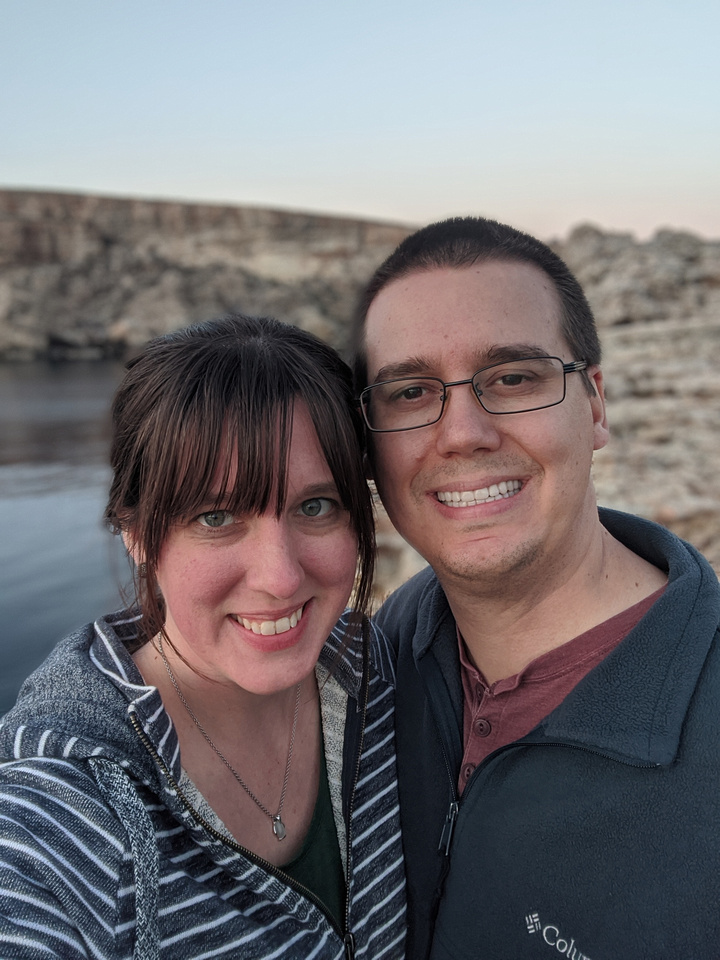