Did someone say more temples?

If you haven't picked up on it, Malta is known for its temples. The entire island is almost a UNESCO site and everywhere you turn, you are looking at something ancient.

Today we wandered over to the western side of the island and started out exploring the Hagar Qim and Mnajdra Temples. The sheer size of these rocks is incredible and the designs are so well preserved. 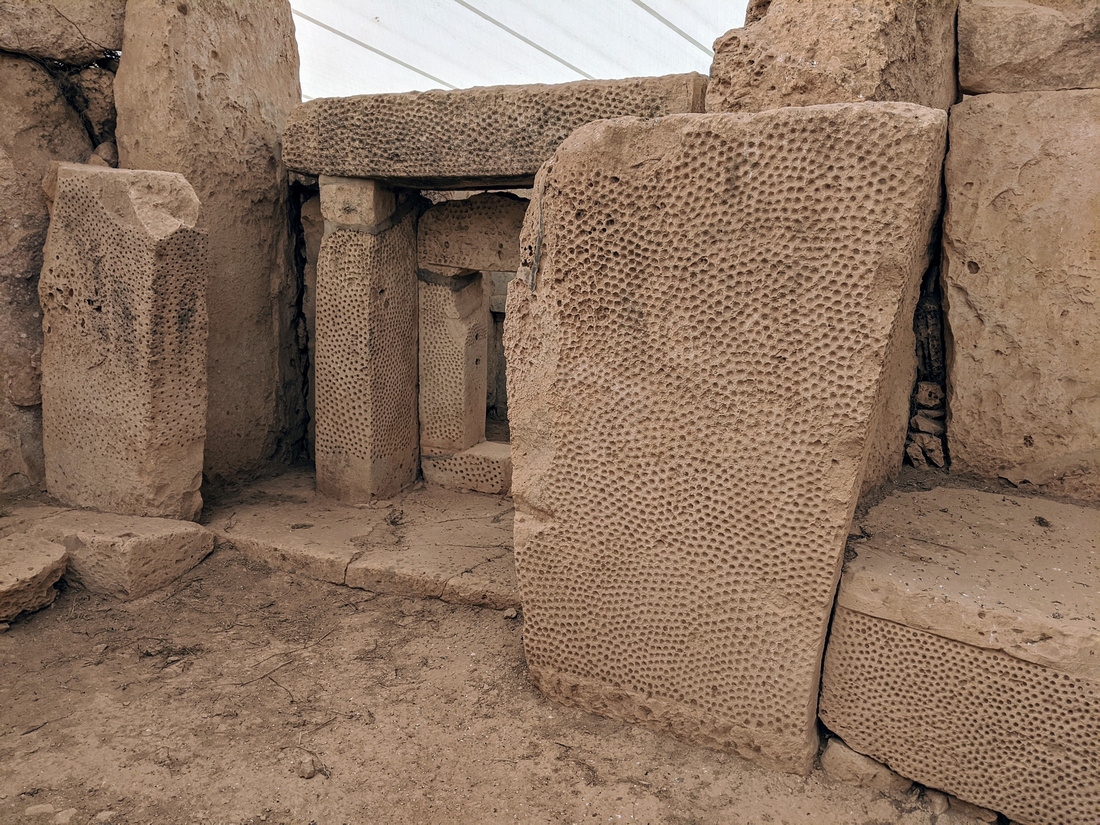 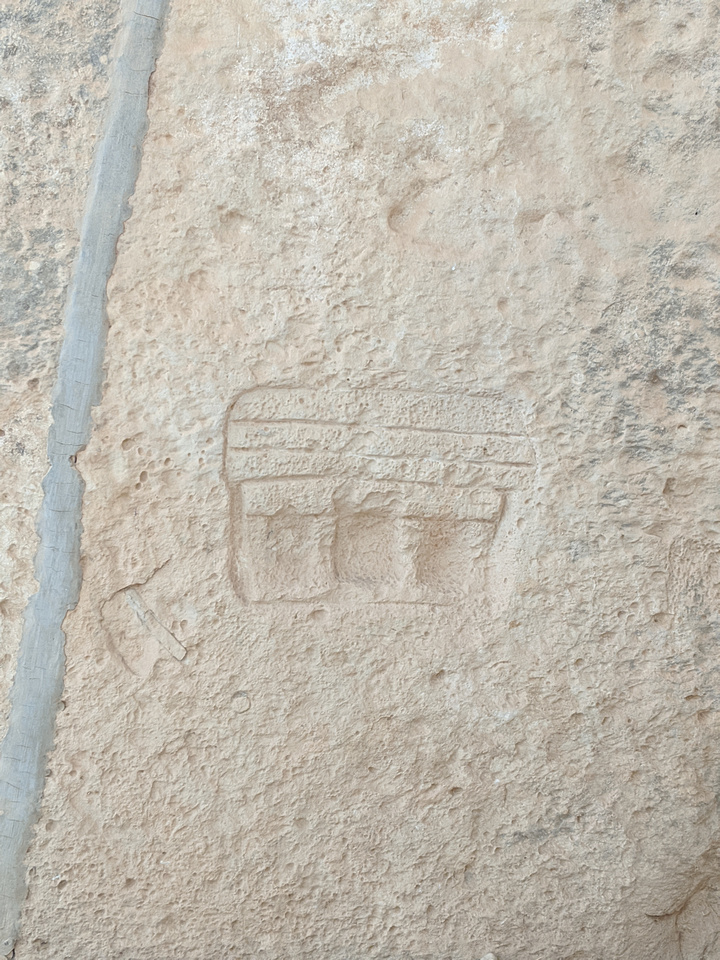 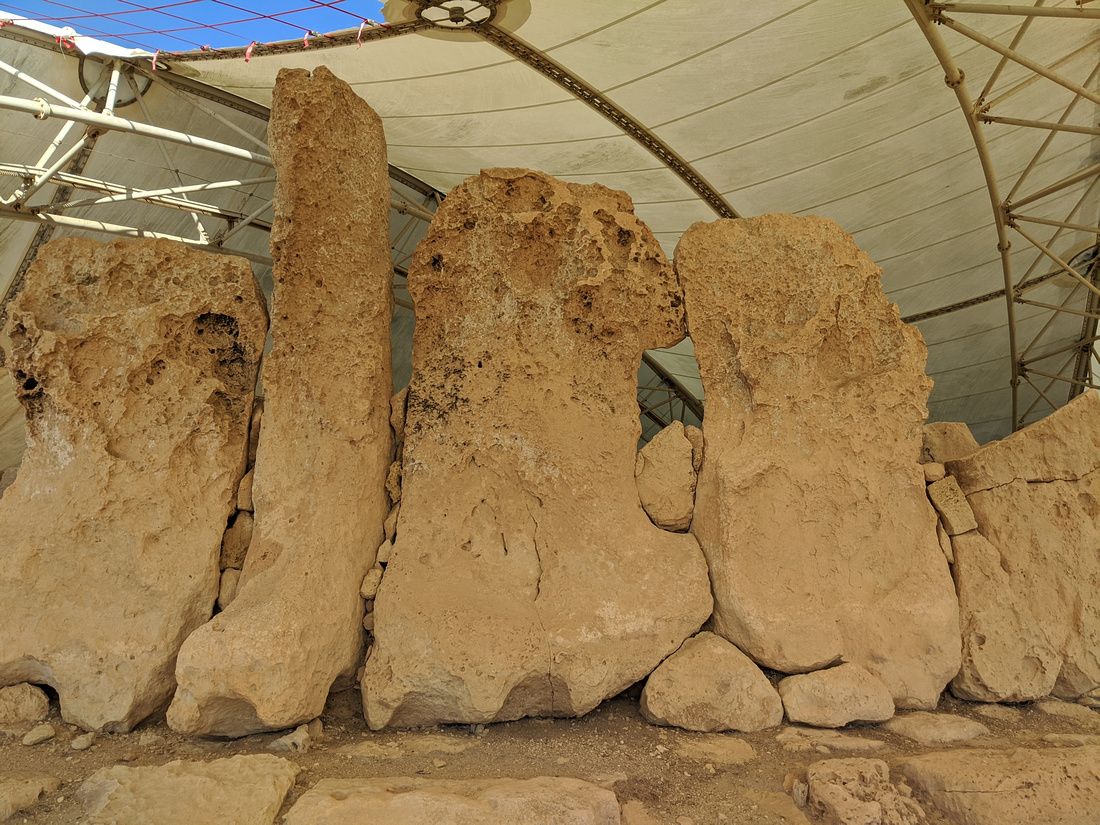 When Hagar Qim was discovered, only the tallest rocks were exposed to the elements for all these years and you can tell (above).

As Kevin and I wandered around these two temples, we are amazed that they don't get as much attention as Stonehenge. I appreciate that Stonehenge is romanticised, but it's actually quite boring compared to the intricate temples in Malta. Hagar Qim was built for the solstices and the sun shines directly in one of the chambers only during this time. But during other parts of the year, when the sun hits, the ancient people were able to track tomr. (Much like a sundial).

These two temples are connected by a number of trails, so we set off on one towards an old tower along the sea. On this trail, we also were able to enjoy the beautiful turquoise water and a window into the sea. 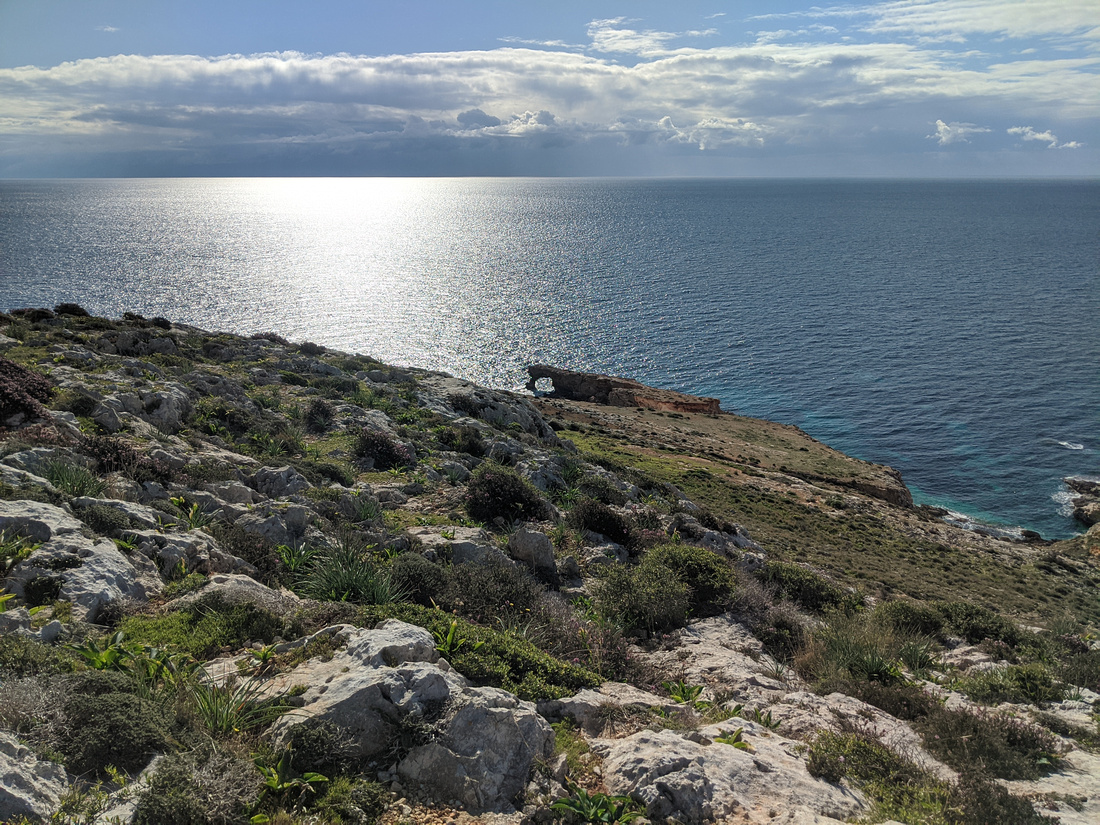 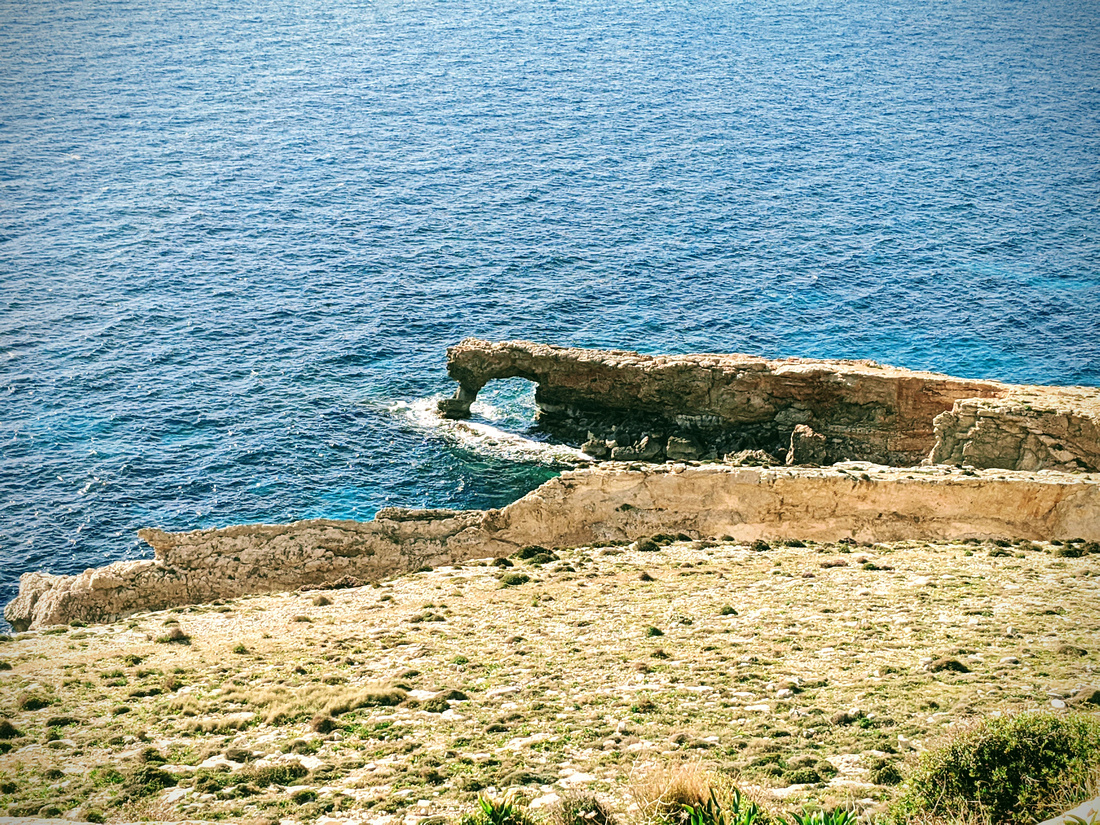 Next stop = Mdina which is the only walled city left standing in Malta. This city is actually used for filming all the time due to its large entry gate and quaint streets. Most notably, Gladiator, Troy, Game of Thrones, etc.

The city itself was very pretty, but truly not much of anything inside the walls. When looking for apartments, we almost booked in Mdina and we are now very glad we didn't. Food wise, there was only one restaurant open. Considering the touristy nature, it seemed odd to be so dead. However, it is January, so maybe that is a factor. 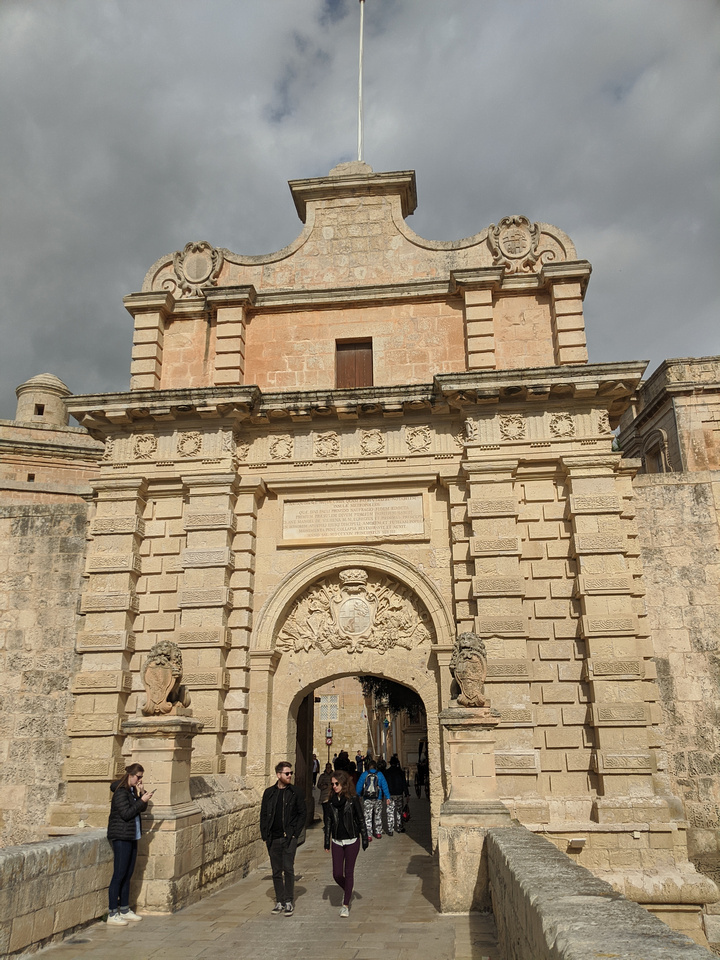 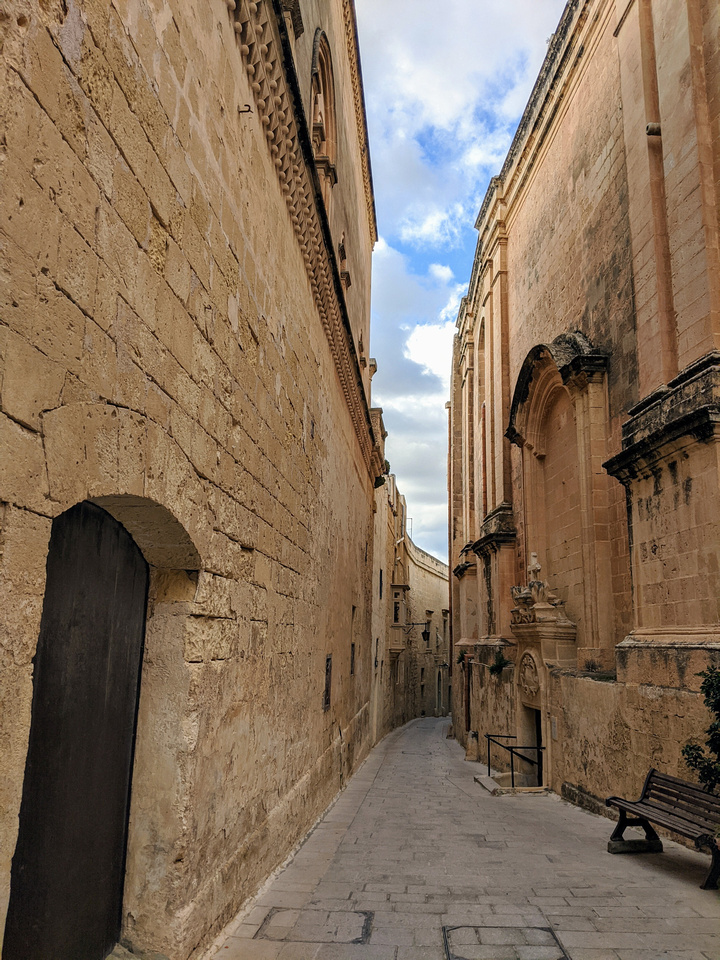 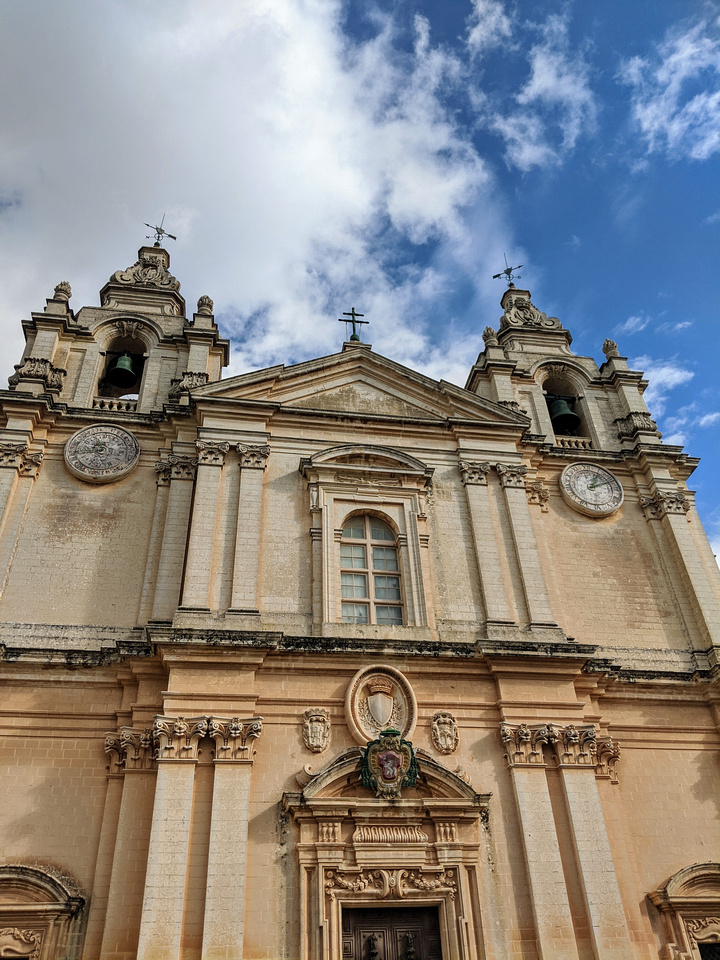 I think we were inside the city walls for maybe 45 minutes before we headed towards the neighboring city, Rabat. Here we found a late lunch - traditional ftira which is basically a sandwich made with Maltese bread. Gammon and cheese for me. Sausage and pickled onions for Kevin. Very dense bread, but overall decent. 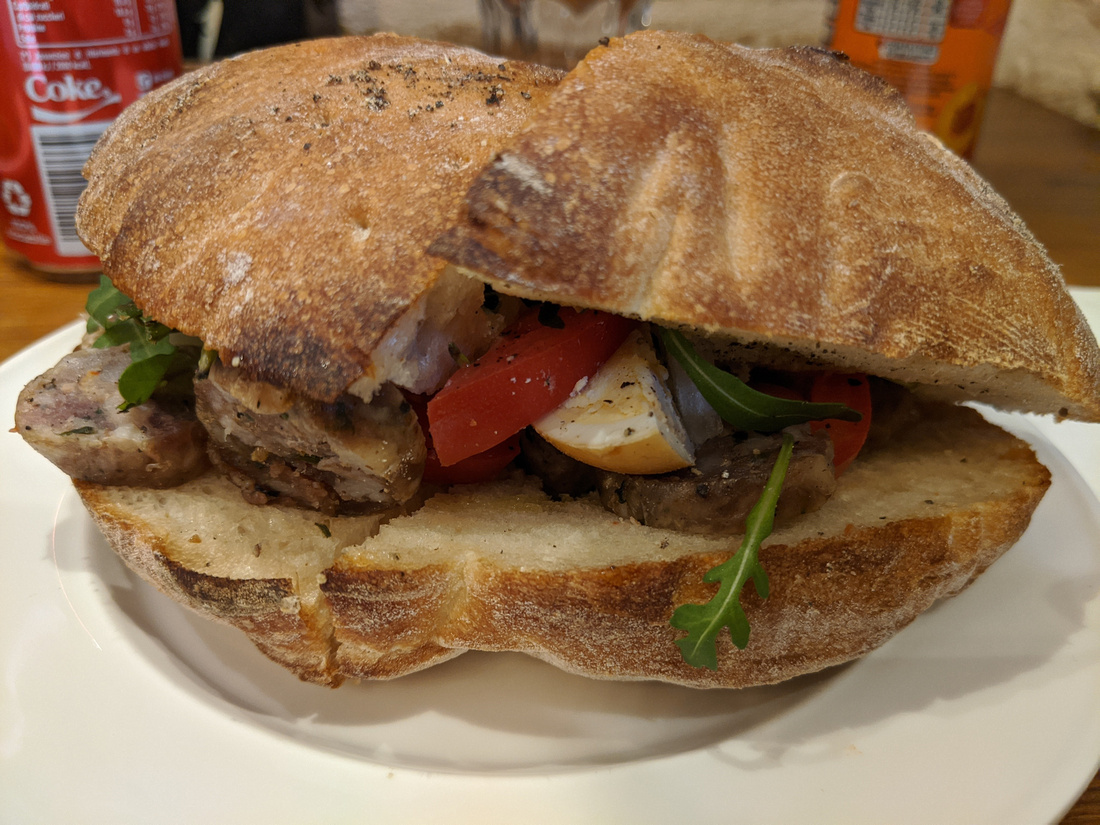 We knew the rain was heading our direction, so we popped over to St. Paul's Catacombs which turned out to be a much bigger deal than we thought. There were twenty three different catacombs...most of which you could explore underground. Multifaith ones, single faith ones, pagan ones -- all together as one.

These are Roman and use was discontinued by 600 AD (likely started in 300AD-ish). It was illegal for burials to occur inside city walls (Mdina) and so that is why the catacombs were created. Most churches have some sort of crypt or underground burial that you can view, but these are on a whole other level. The carvings, the decorations, the bones! We spent a good two hours walking in and out of the crypts. Some were huge that you could wander around in and others were smaller, but you could view. Each one had a sign out front indicating the significance and which religious affiliation. However after wandering through a few, we could tell which were Jewish and Christian/Pagan. 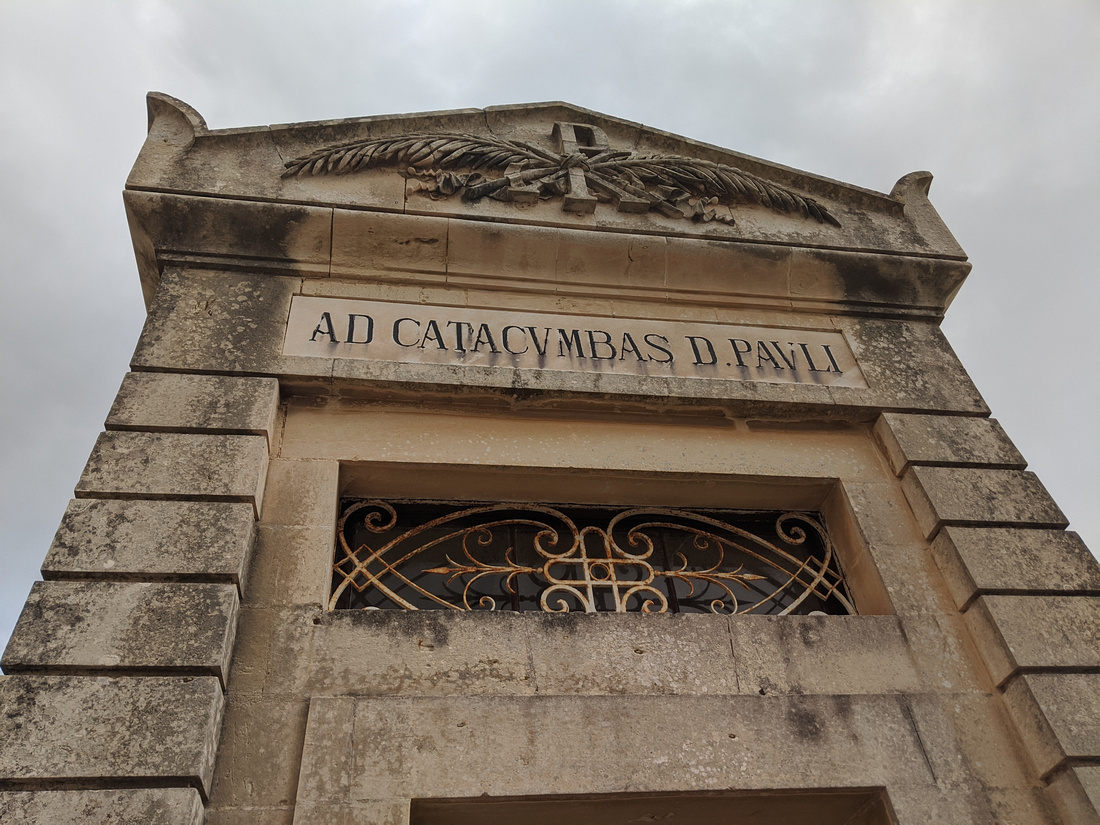 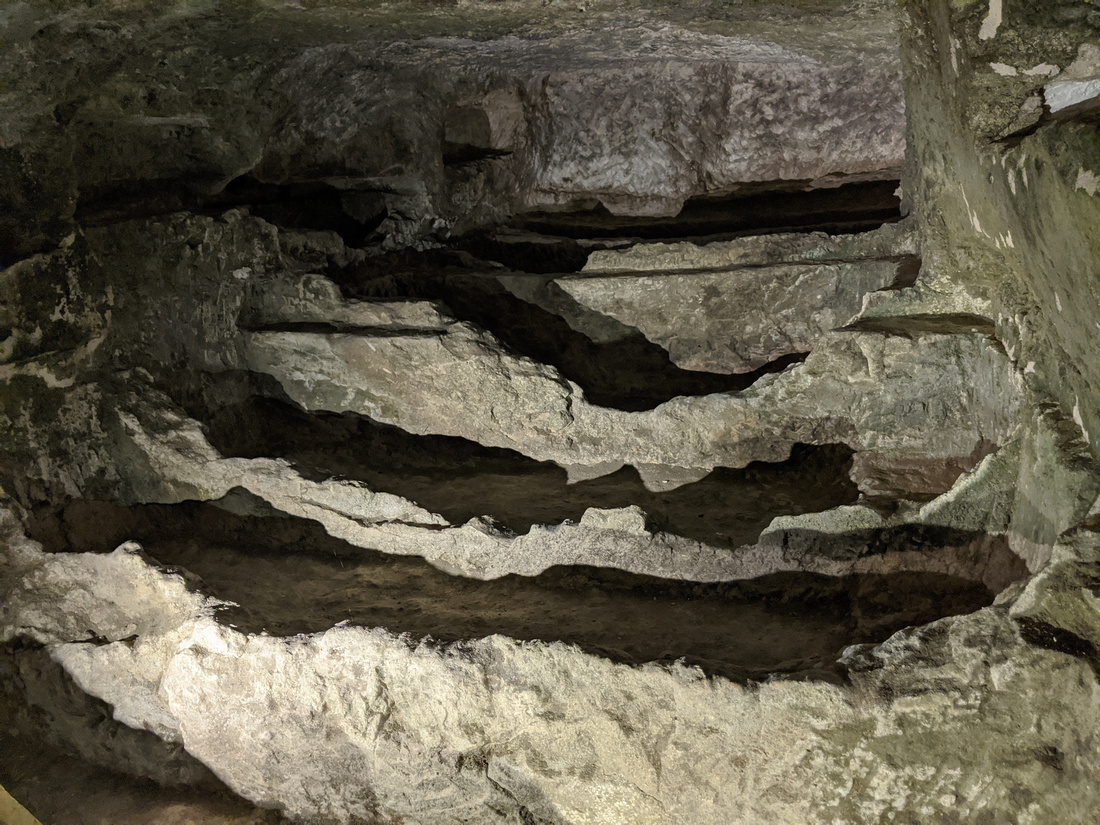 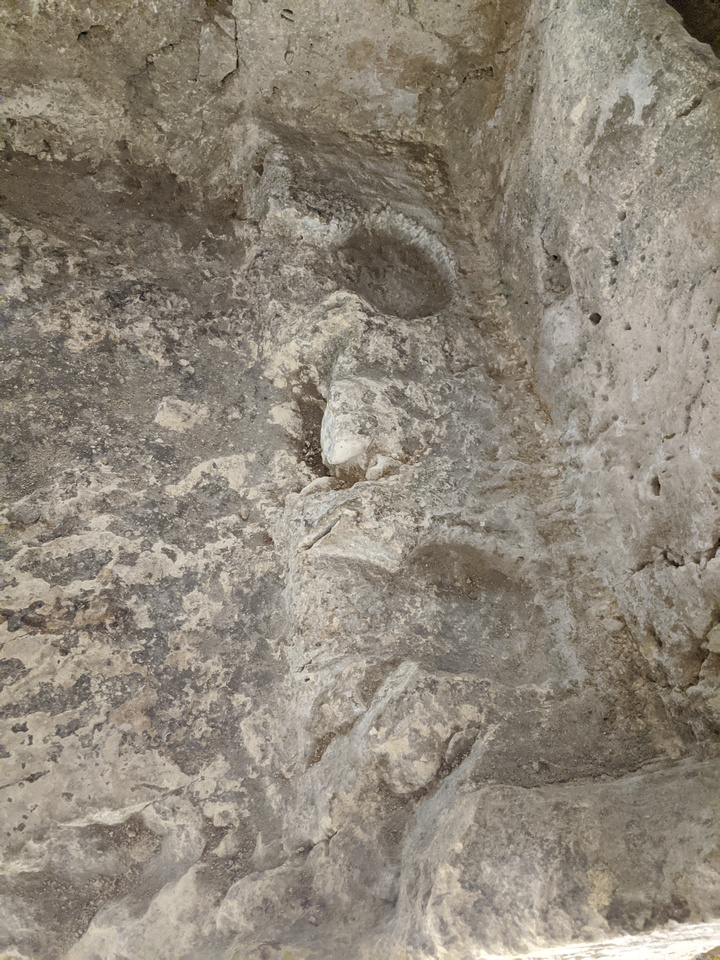 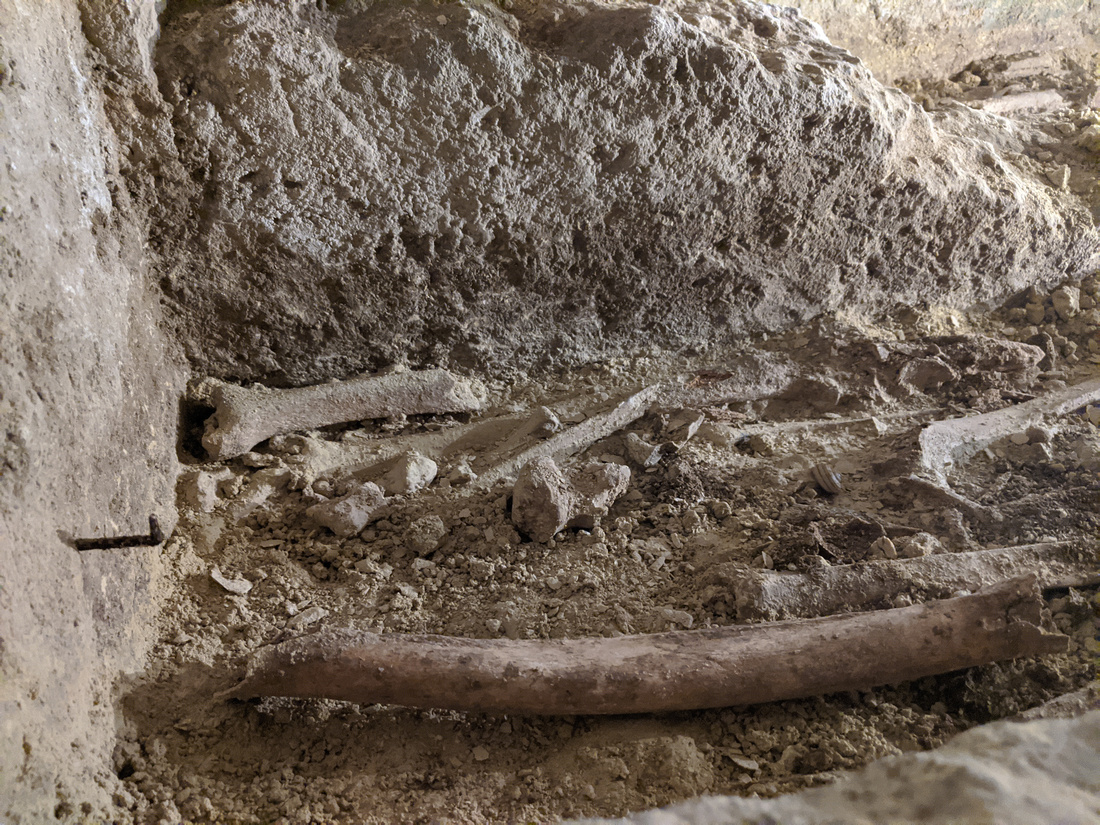 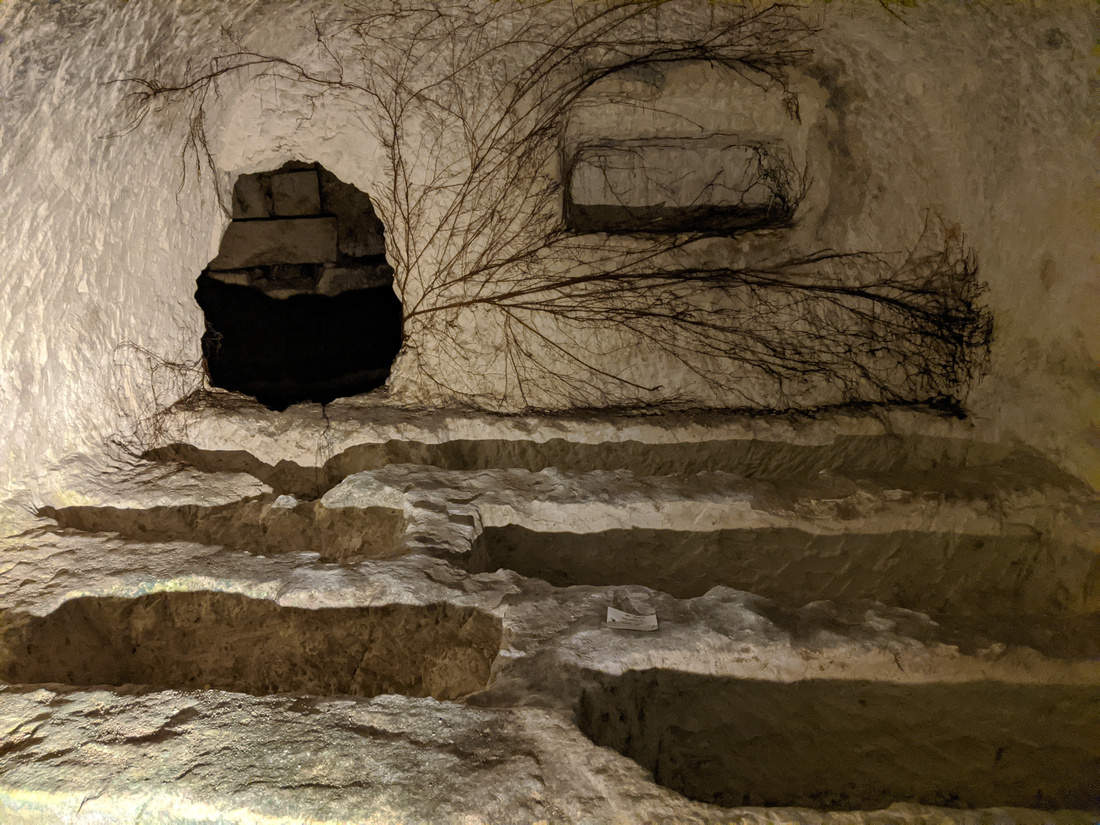 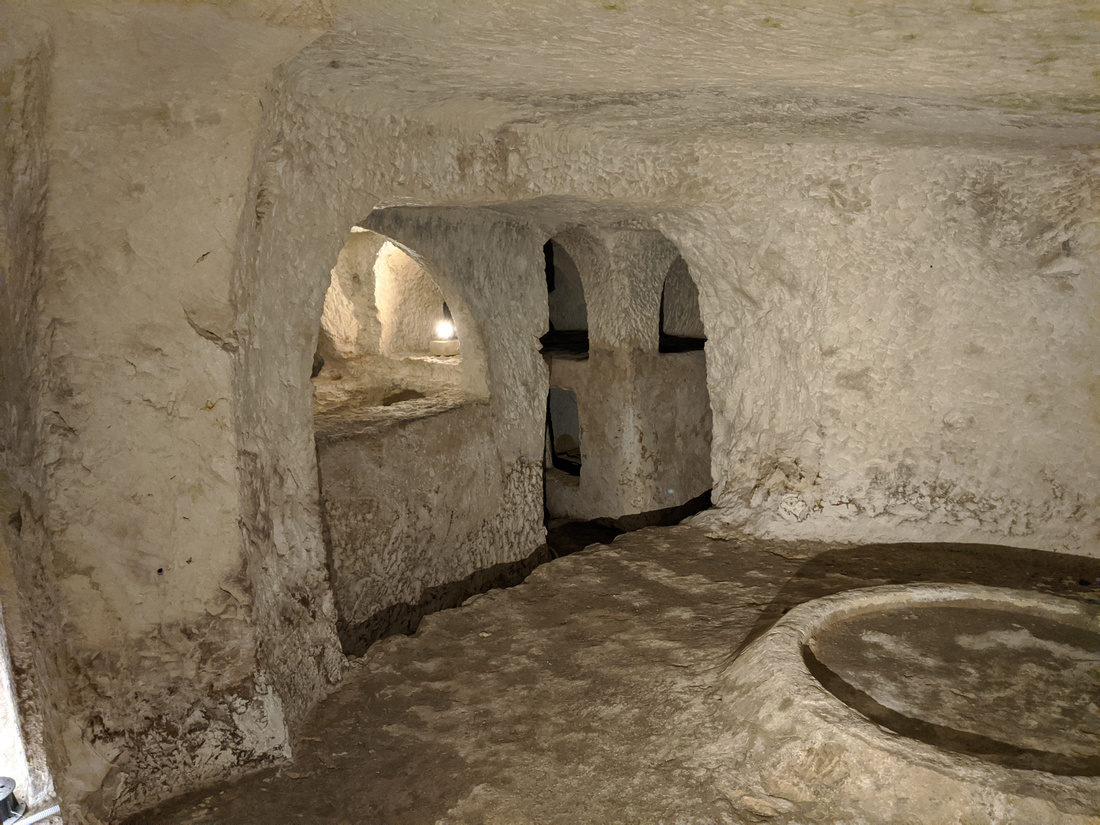 Having now avoided most of the rain, we headed back towards Valletta but not before stopping at a street shop selling traditional Maltese sweets. Malta is known for their cannolis, and again, they did not disappoint! We picked up two different ones, but both filled with chocolate. So good.

Back in Valletta, we needed to find dinner so we could head home to pack. Serious debate whether we should go back to that calzone place. We were headed that direction, when we made a last minute, spontaneous and brave decision to try mideastern cuisine. We've never had this before, but as Malta is this melting pot between Italy and Tunisia, it only seemed right. Plus they knocked Italian out of the park, mideastern has to be decent.

Having no idea what we were doing or what we were ordering, 10 minutes later we were sitting in front of a platter of proper mideast food. Chicken was really good and many of the sides I chose were pretty good. Rice was actually just red pepper flakes with a side of rice (holy spicy). Mixing it with the quinoa cooled it down a bit. Chickpeas and potatoes weren't bad either. Not sure I will crave those flavours, but would definitely eat it again if we are ever able to travel to the mideastern region. 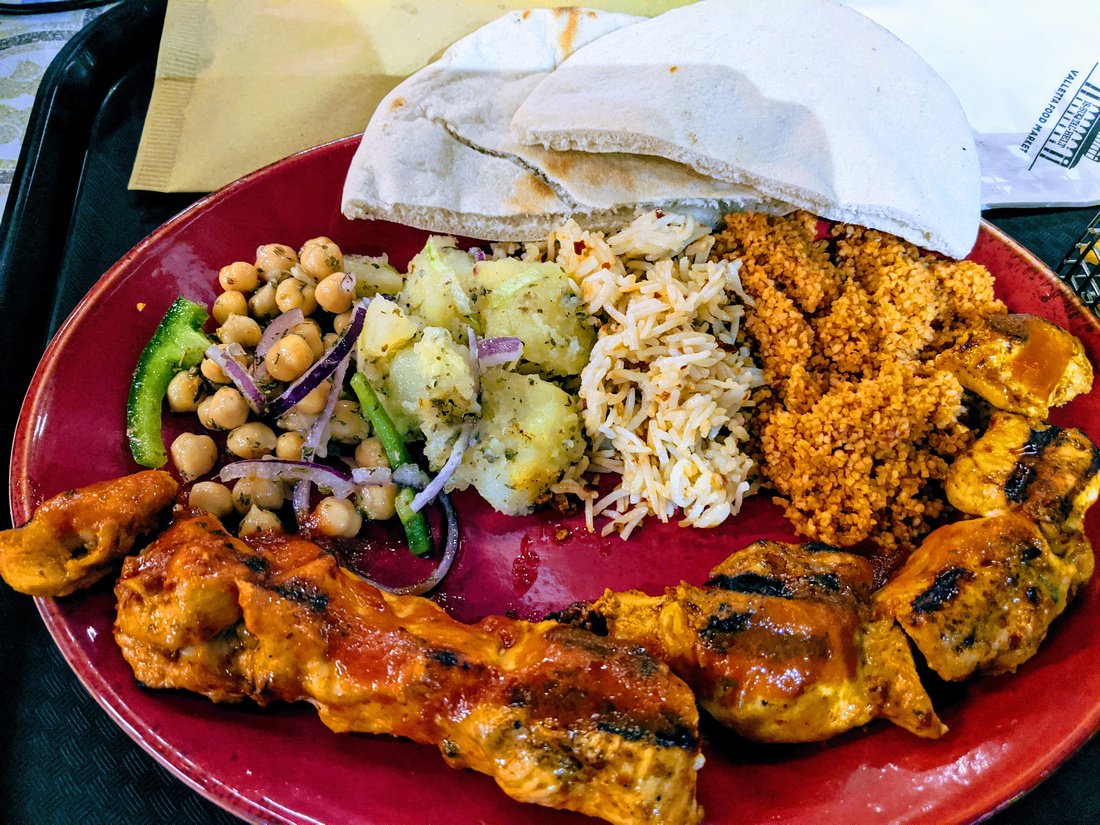 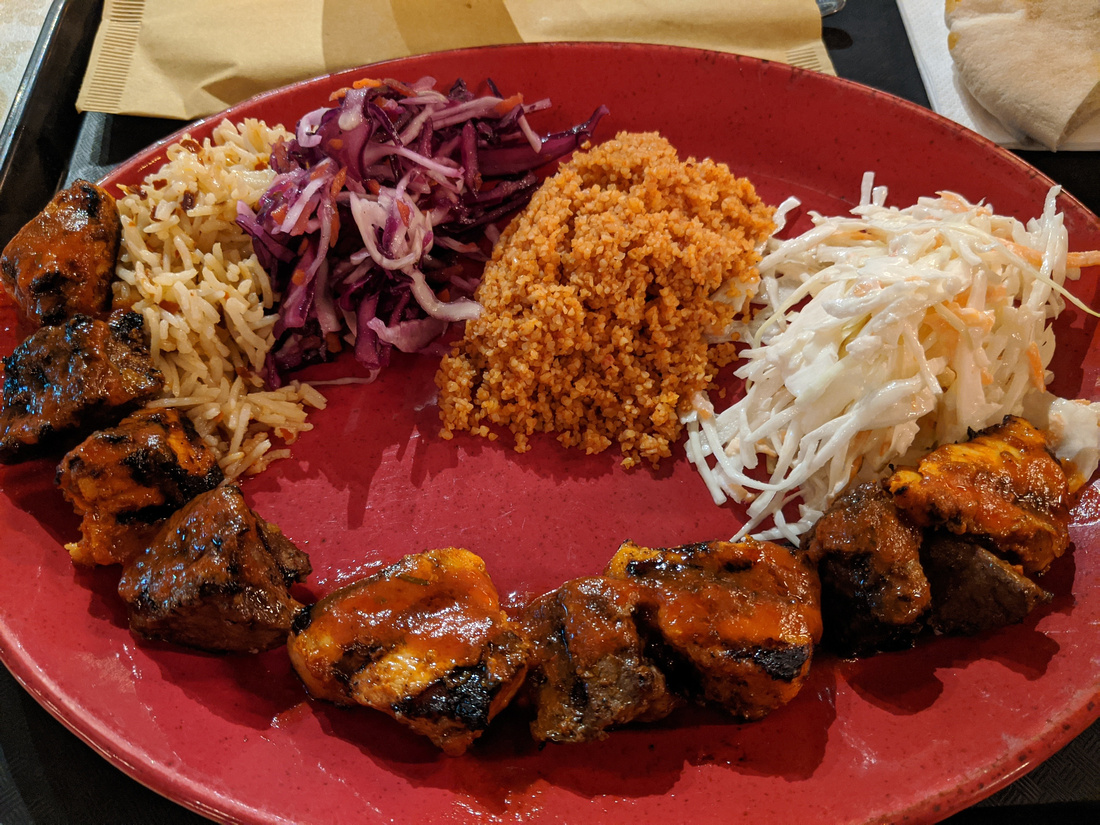 Just eating this food has reminded me how much I want to visit somewhere in the mideast, and reminds me that we are still at war which means I still can't.  You know we've been at odds with the Middle East since I was in eighth grade? That's a lot of years - and in reality, it started even before that. My desire to visit has only grown over the years, and every time I think we are making progress, the US leader makes a decision which jeopardises security for Americans in those regions. It's sad really. Really sad. Maybe one day I'll out my Middle East and African politics college degree to use.

Until then, we will continue exploring the world around it.

Tomorrow's flight is early, so it's time for bed. I just set my alarm and the first number is a 4. It's too early already and I've not even gone to bed yet.

Next trip is at the end of the month - first time we've been to the US since last March. Looking forward to seeing all my people and eating allllll the food. And maybe stock up my ranch supply... 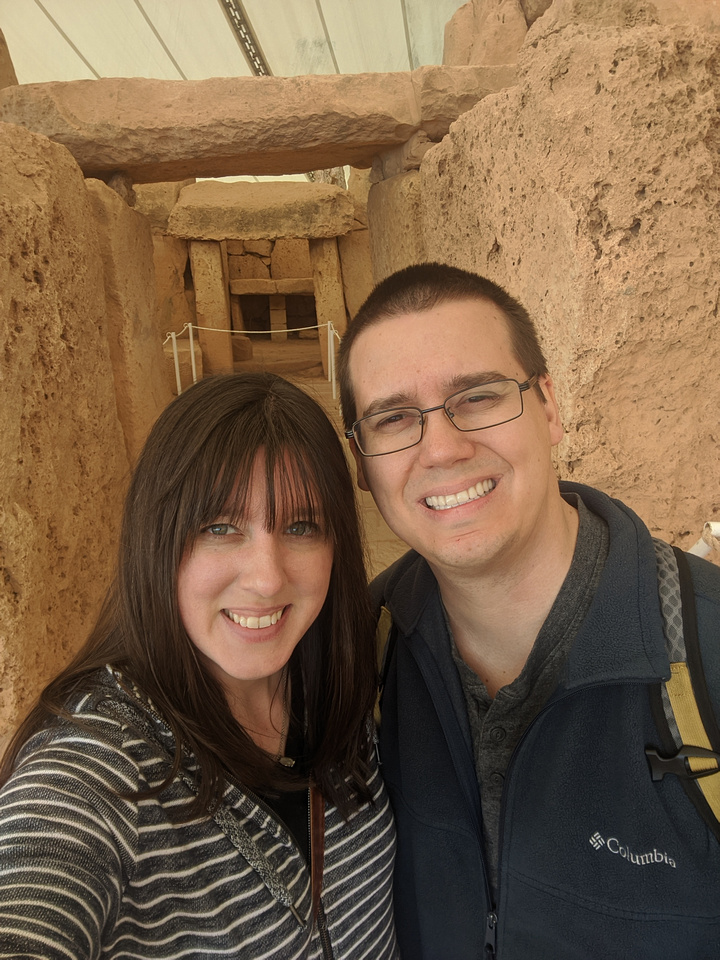