When we decided to fly to Spain over Easter, we didn't have a great perspective for what that truly meant. Neither of us are religious and truly had no exposure to Catholism growing up, so other than expecting things to be closed, we didn't know what we would experience.

As it turns out, Semana Santa (Holy Week) lasts the week leading up to Easter Sunday, which means when we arrived Thursday, we were right in the middle of the celebrations. Our hotel had warned us in the days leading to our arrival that our entrance into the hotel would be blocked, but again, since we had no appreciation for what was ahead, we didn't think much of this.

We arrived on Thursday, and unfortunately all the festivities were cancelled due to rain. It didn't actually rain much at all, which ended up frustrating all the crowds who lined up hours and hours before the processions! Serious dedication to ensure front row seats.

On Friday morning, we accidentally walked near the street for the procession and were able to view Jesus nailed to the cross being carried through town. A drum line and various trumpet players accompanied this procession. Surprisingly most in the audience had a cerveza in hand which led Kevin to refer to the week as a party week going forward. I'm not sure it's exactly a party week, but it's quite interesting how religious the events were with so much alcohol around.

However Friday night ended up being the main event for us. Each evening the seven brotherhoods would walk from their church and to the Cathedral Córdoba - this is a very long procession with brotherhood members carrying candles, crosses and even very large floats by hand. Unbeknownst to us, our hotel room faced Catedral Córdoba and so we could watch from the window instead of being trapped in the crowds of thousands of people. Impending rain caused some of the brotherhoods to cancel their walk, but two brotherhoods carried on...

The first brotherhood called El Decsendimiento began walking by our window just shy of 11pm. The members walked along with very large candles and stopped periodically (likely to allow those carrying the massive floats a rest). During their breaks, little kids would run around to the different brothers requesting some melted wax from candles. Turns out, these are family balls that are used every Semana Santa and everyone wants the largest one at the end of the week. This was entertaining to watch with all these little kids running around all these lit candles...not one kid caught on fire amazingly.

The most striking feature of the brotherhood are their robes and conical hats - burgundy and white. As an American, the resemblance of a racist group cannot be ignored, but this dates back much farther in history which ultimately means the US group likely borrowed the robes idea. Regardless, its added character intrigued us both.

This procession had a very large drumline and trumpet group with very upbeat music - while we did not recognise it, it brought joy. 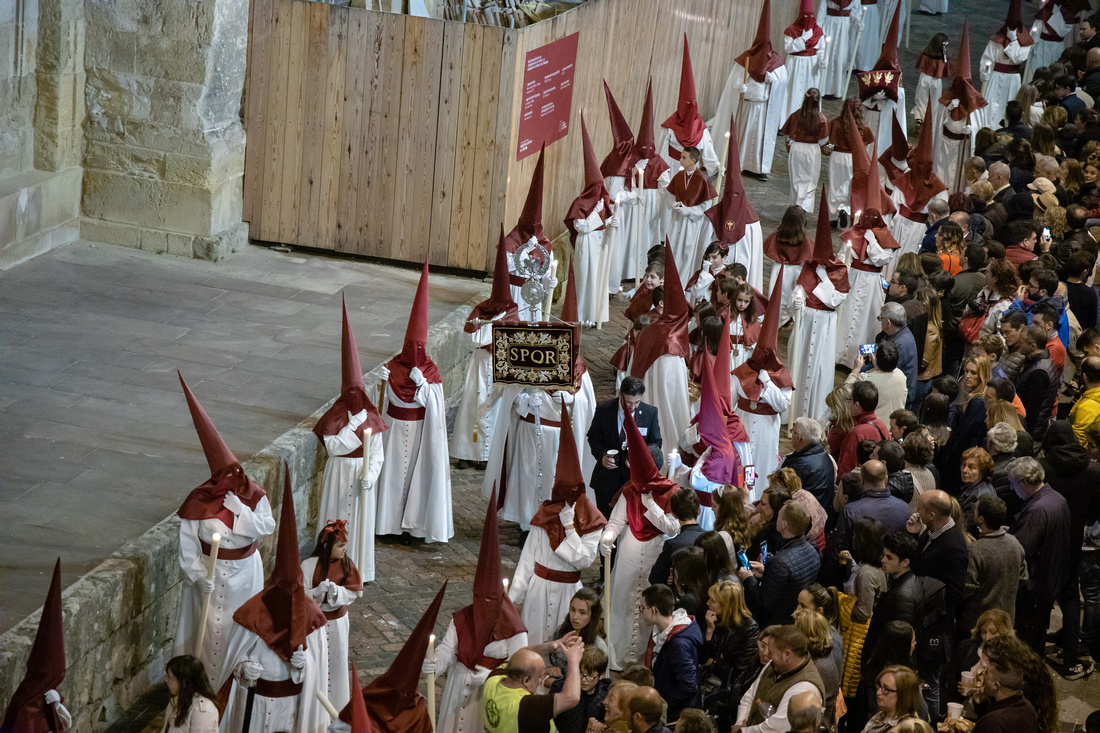 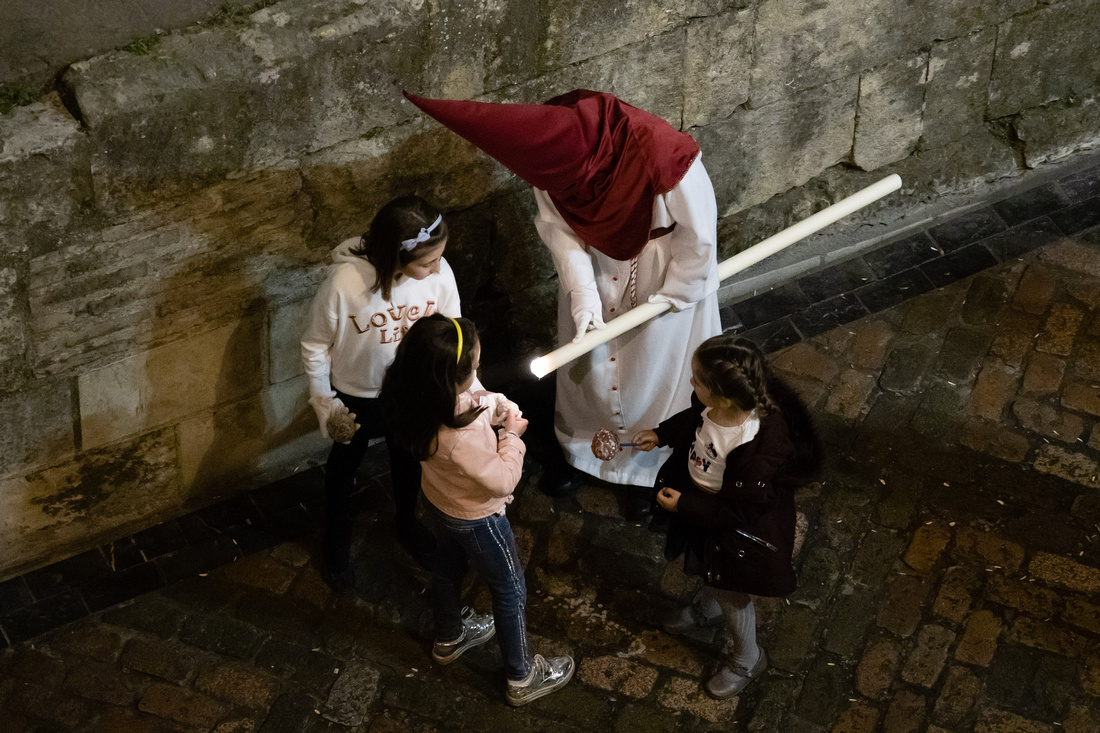 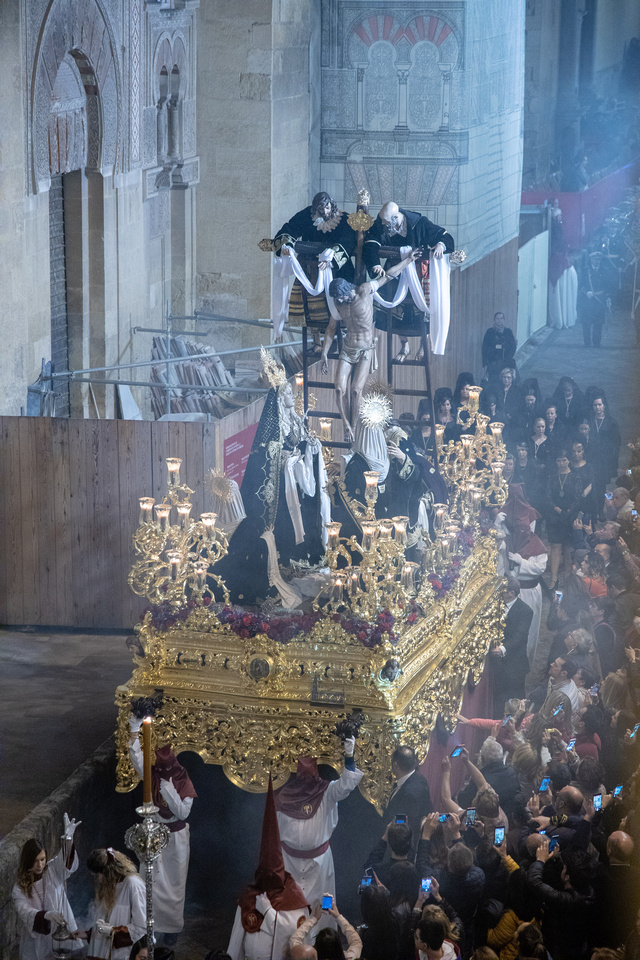 Tsecond brotherhood followed shortly after the one just after midnight, and the crowds had almost all evaporated in midair. Because of this, we headed downstairs to be closer to the second procession. El Santo Sepulcro arrived in all black robes in a very somber manner with some of the women walkers dressed in all black dresses with very large black lace headpieces. 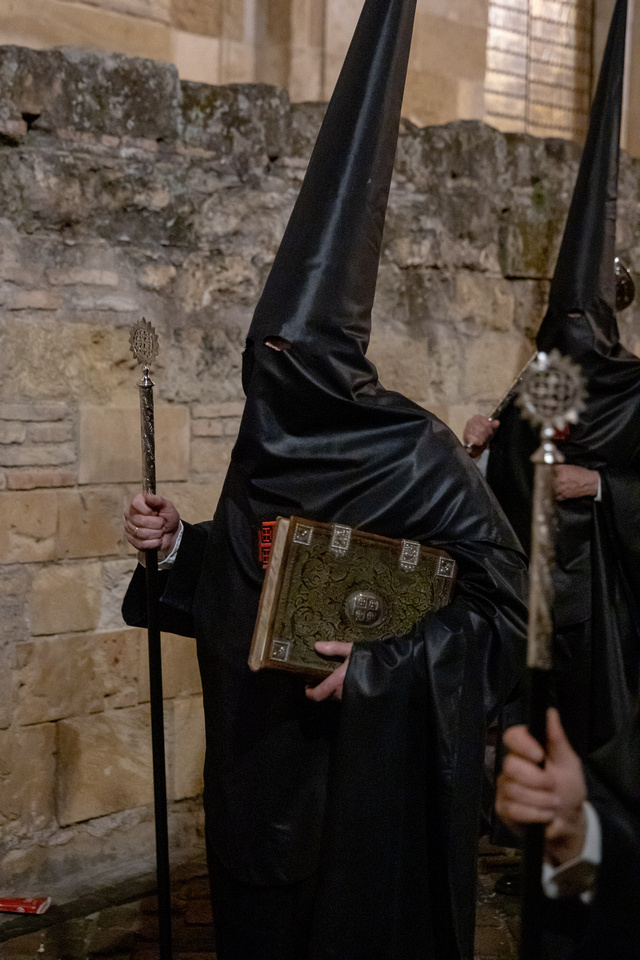 No large band of drums and trumpets, but rather a solo trumpet player. I'm sure if I understand the history better, I'd have a better story to share, but honestly it felt as though this was simply a procession of mourning.

Ultimately, I'm not sure I understand everything we experienced, but you cannot deny the value of this tradition. Over the years, we've experienced many many different religious events, and while this one did not incite strong emotions as others have, I know we certainly won't forget the experience of Semana Santa in Spain.